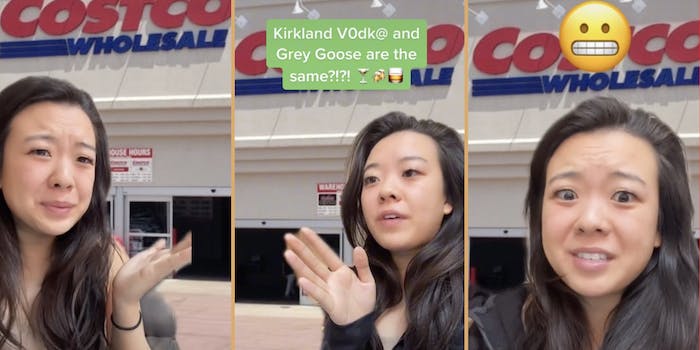 ‘Folks don’t need to be overpaying for marketing’: TikToker says Costco liquor is the same as high-end brands, sparking debate

'It is made in the same place, that doesn't mean the SAME INGREDIENTS OR METHODS.'

A viral TikTok showing a “Costco hack” for buying quality alcohol at a lower price has created a debate among viewers.

The TikTok was posted by Viv, known as YourRichBFF across social media, on Dec. 10. In it, Viv claimed that the distillers that produce Grey Goose also make Kirkland vodka—Costco’s in-house brand. Her video has received 3.5 million views, but it isn’t entirely accurate.

“You do know that Costco’s Kirkland booze is all made by famous distillers, right?” Viv asked in the TikTok. She then asserted that Kirkland bourbon is produced by Jim Beam in Kentucky and its tequila is made by Cielo.

There has been a long-standing rumor that Grey Goose and Kirkland-brand vodka are the same product in different bottles. In 2020, a representative for Grey Goose denied that claim, citing differences in its manufacturing process and sourcing, in a fact-check report from USA Today. The outlet also reported that the origins of Costco’s vodka is unclear, but the brand uses water from the same region in France as Grey Goose.

While the two brands aren’t the same, Kirkland brand vodka is quite popular among enthusiasts.

As for the other liquor, Thrillist noted that Kirkland bourbon is now produced in Tennessee, not Kentucky. There are varying reports on where the brand’s tequila is made, and it’s unclear if it comes from the same distillery as Cielo.

Commenters pointed out that sharing a distillery does not make two products the same.

“NO ITS NOT!!!!!” one commenter wrote. “It is made in the same place, that doesn’t mean the SAME INGREDIENTS OR METHODS.”

“Yeah … That’s not how that works,” another said.

Others didn’t care about the comparison, defaulting to the cheaper option regardless of the taste.

“Vodka is vodka, it all tastes like rubbing alcohol and that’s why I love it,” one person wrote.

Viv told the Daily Dot in an email that she has seen the disputes to her claim, but she maintains that the two vodkas are comparable enough that buyers should opt for the more affordable version.

“To me, it feels that even if the products aren’t identical, they’re NEARLY identical enough that folks don’t need to be overpaying for marketing,” she said.

The Daily Dot reached out to Costco by contact form.