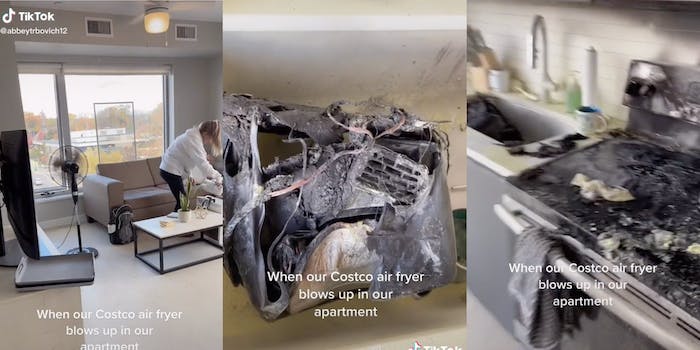 A young woman was greeted with a rude surprise after trying to make an air-fryed hashbrowns.

In a TikTok video, Abbey Trbovich’s friend shows the remnants of her apparently exploded air fryer. All that’s left is melted plastic goop all over her stove and the mangled inner body of the device chilling in the kitchen sink.

“When our Costco air fyer blows up in our apartment,” the text overlay on the video reads.

The person behind the camera focuses in on the hunk of plastic and tells it,
“You’re done, you’re done.”

But 10 fireman, an exploded gadget, and a singular hashbrown later, it seems that no one came out injured from the mishap. In a comment, Trbovich confirmed that she accidentally turned on the stovetop with the air fryer on top, apparently causing the explosion.

The video of the incident is only the third on Trbovich’s page, and it already has 4.2 million views and a lot of opinionated comments.

Samantha, owner of Everyday Family Cooking blog, wrote that there have been two fires in her area caused by air fryers being used on top of the stove. In those occasions, the “air fryer either melts to the stove or it explodes and ruins half of the kitchen.”

She explained that the heat from the stove—whether it’s on, or there’s residual heat left after cooking—can heat the device in an unintended wayside and lead to an explosion.

“I don’t care if you have ways to make it impossible for you to turn the stove on. Just don’t do it,” the cook wrote.

Many people in the comments section pointed out the faulty use or made otherwise snarky comments.

“People who do not read instructions serve as warning labels for others,” @easydoesit.fl wrote.

“Bestie I’m afraid to tell you this.. there’s warning to only put it on a counter and specifically not the stove,” another said.

“Hi neighbor. I had to carry my two cats out at 10AM bc of an airfryer and stovetop combo??” @localaliencombo replied. Trbovich wrote back saying they owed him a drink.

Others honed in on how convenient it was that the product came from Costco.

The Daily Dot reached out to Trbovich via TikTok comment as well as Costco.