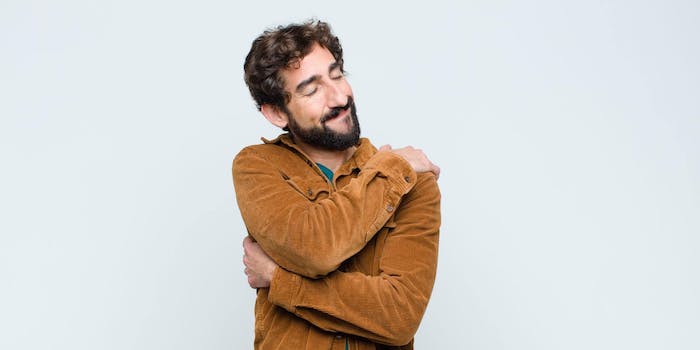 Quarantine has some roommates feeling cuddly

Under lockdown, people are apparently getting closer with their roommates.

The idea that real men don’t hug, cuddle, or engage in the softer side of things has been slowly coming down over the last few years (and it’s a surprisingly modern idea anyway) but it looks like the current pandemic is speeding the process up a bit. A pair of recent Reddit relationship posts feature roommates stuck together for the lockdown getting a little snuggly together.

In one OP is an out gay guy with a stoic roommate of unknown sexuality. Despite his intimidating physique and reserved nature, the roommate is also “a warm and protective friend” who helped OP get back on his feet after escaping an abusive relationship. Due to a combination of the lockdown and horrible weather which has kept them from even being able to take a socially-distanced walk, the two of them have been shut up in their apartment together since the lockdown began. After an accidental cuddle where they fell asleep on the couch and woke up with OP sprawled on his roommate’s chest, the roommate has been seeking OP out for cuddles ever since.

In the other post, OP is a disabled man whose condition means he needs to take a lot of naps. Now that his roommate is home during the day, he’s taken to draping a blanket over OP when he finds him sleeping without one, dropping a little kiss onto his forehead as he does. OP is sometimes not all the way asleep when this happens and wants advice on asking for more of them when he’s awake. Though this would probably be a little creepy if it was a level up from their normal degree of intimacy, OP clarified that his roommate already hugs and kisses him on the cheek all the time, and made sure that he was comfortable with it first. The two of them are very close and physically affectionate already, he just wants more of it

A crucial difference between the two posts is that while OP no. 1 has developed a crush on his roommate, OP no. 2 is pretty sure he’s straight and doesn’t want any kind of romantic thing to happen between them, even though his roommate is an “objectively” attractive bi guy. While there has been some tiresome homophobia and attempts to paint roommate no. 2 as predatory, even though OP no. 2 stated in the beginning that this is within the bounds of their already established relationship, redditors have mostly been lovely and supportive.

Admittedly some responses were less helpful than others.

Most emphasized communication for both sets of roommates, saying they need to make their desires and needs clear if this is going to work out while they’re all trapped during the pandemic.

Though one Redditor thought it should all remain unspoken until they have the freedom to leave the situation if they need to. Otherwise, if they’re not both on the same page, they could end up in an awkward stuck-with-the-ex type situation for the foreseeable future.

There were also concerns that roommate no. 1 might be closeted and/or confused, and if that was the case then OP no. 1 needed to tread carefully and gently while he figured himself out.

While some redditors wanted everyone to know that they found platonic physical intimacy weird, others wanted to emphasize the need and normality of it, and the harm caused by modern Western society’s rejection of it.

Cuddle your friends. It doesn’t have to mean anything you don’t want it to. Just make sure it’s all consensual first.