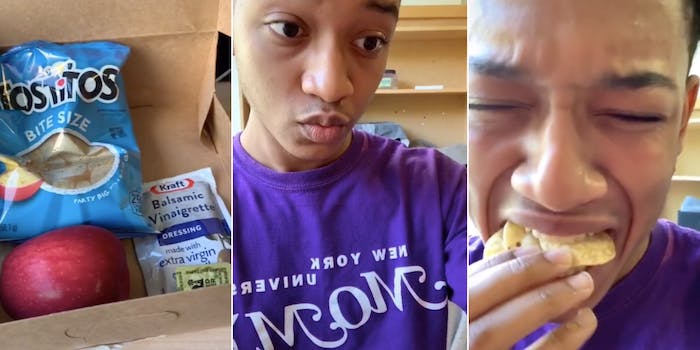 College students are roasting their miserable quarantine meals on TikTok

If you can even call them meals.

As universities begin reopening for their fall semesters amid the ongoing COVID-19 pandemic, students are discovering just how many challenges they’ll face by going to school under these extenuating circumstances. According to TikTok, one of the greatest challenges includes finding a half-decent meal.

Quarantined students at New York University have been documenting the shameful excuses for “meals” delivered to their dorms. Despite costing undergraduates approximately $76,000 a year for tuition, room, and board, and other fees, the Manhattan college apparently could not handle the daunting task of throwing a reasonable combination of fat, carbohydrates, and protein in a box for students confined to their dorms.

TikToker @rico_da_fool shared an example of the “meal” he received. “Chicken caesar salad but the chicken caesar salad is silent,” he captioned his video, which showed a bag of Tostitos, an apple, and a packet of balsamic vinaigrette dressing packed inside a brown box.

Another TikTok user, @filmgrrrl69, showcased her allegedly “vegan” meal, which comprised a bag of Lays chips, a Nature Valley bar, an orange, and a Snack Pack that clearly said “made with real milk.”

This doesn’t appear to be a shortage of “vegan” meals on NYU’s part, but a case of delivering them to non-vegan students. TikToker @tongaronga, who is not a vegan, uploaded a video of her vegan quarantine breakfast, which consisted of a flimsy pastry, a juice cup, and a whole-ass lemon.

Many spectators compared the NYU food debacle to the infamous Fyre Fest disaster of 2017 when thousands of unsuspecting ticket-holders were stranded on an island in FEMA disaster relief tents and fed cold cheese sandwiches.

It appears that at least one NYU student managed to turn literal lemons into lemonade, as TikToker @rico_da_fool said his dorm manager gave him a top-dollar breakfast from GrubHub three hours after he uploaded his initial food video. The school is also giving students $100 e-gift cards to make up for the meal delivery snafu.

Best of luck to other quarantined NYU students in shaming their exorbitantly priced university into giving them adequate food.