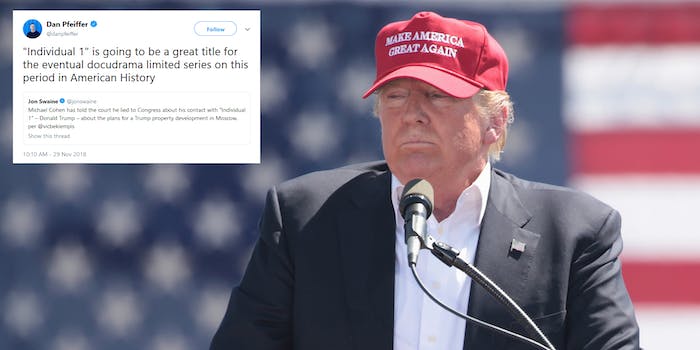 There were a lot of jokes.

It also references “Individual 1” in the context of winning the nomination ahead of the 2016 election.

In the wake of the plea agreement, Trump called Cohen a “weak person” and accused him of lying about it to get a better sentence. Cohen is now expected to cooperate with Mueller’s probe. The president and his former lawyer have had a falling out in recent months.

With “Individual 1” appearing so frequently, and obviously being Trump, Twitter began mockingly referring to the president by the new moniker on Thursday afternoon.

Awaiting possible comments from Individual-1 before he leaves the White House for the G-20 pic.twitter.com/ooA43D2rom

"Individual 1" is going to be a great title for the eventual docudrama limited series on this period in American History https://t.co/VjuH3IFHZY

All of which casts Individual-1’s wild tweets this week about Mueller in a specific context. Not to mention Individual-1’s dangling of a pardon for Manafort. https://t.co/7crfeHxNwF

Live look at the WH and Individual 1 pic.twitter.com/N4Pbl86i9E

The Official Seal of Individual-1 pic.twitter.com/gKGiL39XpR