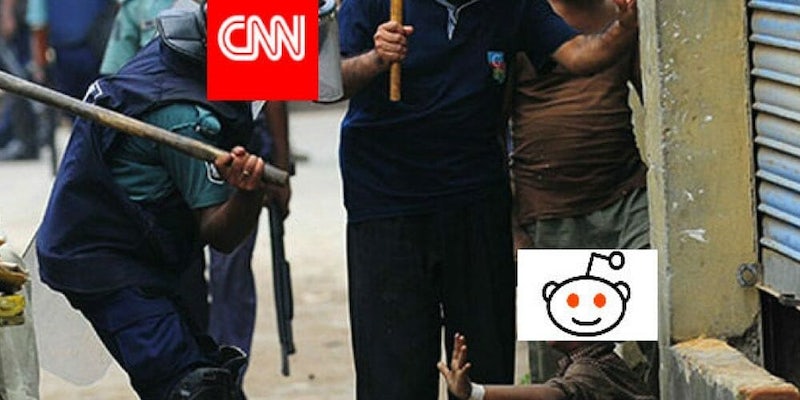 Dank memers have declared war on CNN, and the memes are coming in hot.

Pro-Trump trolls launched a meme war this week against CNN, posting dozens of images that mock the network President Donald Trump loves to hate. Trump fans have always disliked CNN, but the now they’ve taken things to a new level. How did we get here?

It started when Trump tweeted an animated GIF of himself body-slamming CNN. Opponents of the president questioned his professionalism and fitness for office, and CNN undertook an investigation to find out who created the GIF in the first place. CNN’s investigative unit traced it back to a Reddit user, and when the network contacted him, he apologized for the GIF and for his past history of racist and anti-Semitic trolling on Reddit. Trump fans, including high-profile alt-righter Mike Cernovich, accused CNN of “blackmailing” the man into making an apology. Users on Reddit’s notorious r/the_donald/, a controversial and massive hub for Trump fans, are now calling for advertisers to boycott the network.

Trump fans have also spread a persistent rumor that the creator of the Trump vs. CNN GIF was 15 years old, even though there doesn’t appear to be any evidence to support this.

“Was [HanAssholeSolo] a 15-year-old kid, as many posts on the #CNNBlackmail hashtag repeat as fact? … CNN, and screenshots of [HanAssholeSolo]’s own Reddit history seem to contradict this, indicating that the user is significantly older,” the Washington Post reported.

In tandem with the #CNNBlackmail campaign, the alt-right is also fighting a propaganda battle, dumping waves of anti-CNN memes onto Reddit and Twitter. One of the primary instigators seems to be Jack Posobiec, best known for interrupting an “anti-Trump” Shakespeare performance earlier this summer.

Anti-CNN memes, many of them referencing the “blackmail” allegations, are now hugely popular on Reddit’s edgy, tastemaking r/dankmemes subreddit. Again, there’s no evidence that the original poster of the Trump GIF was 15, but many of these memes repeat the rumor.

The general alt-right political leanings of Reddit’s meme communities are only one factor in this meme war, though. Many posters feel that CNN threatened to out the redditor who posted the GIF, and they’re taking that as an attack on the privacy of all redditors. It’s not just CNN versus media-hating Trumpists anymore. It’s CNN versus Reddit.

“Don’t declare war on dank memers,” wrote the poster of this meme:

It’s another case of dank memes meeting real life, with unfavorable results for those in the meme community. Memes are a safe space for teens to joke, express themselves, and be controversial without getting in trouble. It’s a game where they try to make their internet friends laugh and earn validation through retweets and Reddit karma. Often, the game involves posting things they don’t actually believe.

As the creator of the Trump GIF told CNN, “I would also like to apologize for the posts made that were racist, bigoted, and anti-semitic. I am in no way this kind of person, I love and accept people of all walks of life and have done so for my entire life. I am not the person that the media portrays me to be in real life, I was trolling and posting things to get a reaction from the subs on reddit and never meant any of the hateful things I said in those posts.”

But the vast majority of the population doesn’t understand the game, and what they see is what’s literally happening: kids posting racial slurs and celebrating Hitler. The same dynamic played out with the meme teens who had their Harvard admissions rescinded after posting racist memes in a Facebook group.

That’s why it’s so important for those on Reddit to believe that the poster of the CNN meme is just 15 years old and is being persecuted for the same youthful experimentation that defines communities like r/dankmemes. But  as BuzzFeed’s Katie Notopoulos argued, memes aren’t a magical bubble where the rules of the real world don’t apply, and they shouldn’t provide a free pass for kids to be racist.

“A good rule of thumb is that people who are ~actually~ *not racist* don’t post racist memes,” she tweeted after the Harvard incident.

Meme kids believe they’re playing to a very specific crowd, but in a world where a tossed-off dank meme could end up seen by Harvard’s admissions department or retweeted to millions of people by America’s shitposter-in-chief,  their audience is bigger than they expected.

CNN is getting the brunt of the blame for this uncomfortable context shift, but it’s been happening gradually over the past few years, as meme culture has grown and become more mainstream. Dank meme communities are now coming face to face with the central problem of our hyperconnected world: Everything from software to subculture tends to break when it’s forced to scale for tens of millions of people.