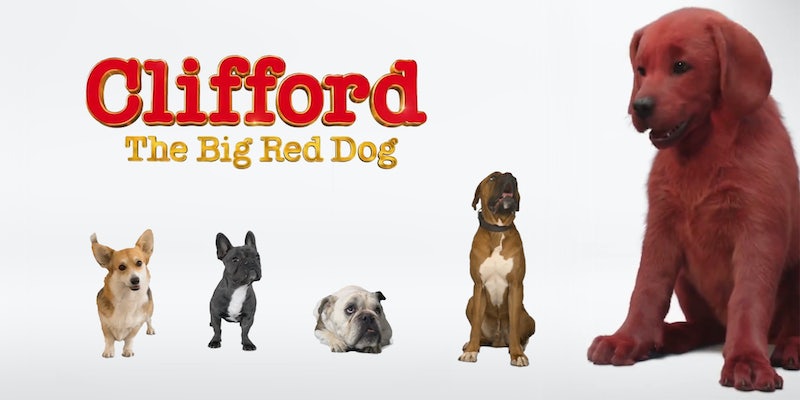 It can be a precarious endeavor when film studios attempt to bring traditionally animated characters into a live-action world. What was once a groundbreaking effect in live-action animated films such as Bedknobs and Broomsticks (1971) and Who Framed Roger Rabbit (1988) has become increasingly tacky thanks to the gratuitous use of CGI—look no further than initial reactions to Sonic the Hedgehog to see how this can go horribly wrong. And now, it would appear, that the forthcoming Clifford The Big Red Dog adaptation may be facing those same problems.

On Wednesday, Paramount Pictures dropped the following teaser for the Clifford movie, set for a November 2021 release. According to Wikipedia, the project has been in development hell since 2012 (it was initially picked up by Universal before the hot potato was tossed to Paramount in 2016, for some reason) which seems like the least of its worries.

Honestly, there was probably no reality in which a giant, red, CGI dog wouldn’t come across as horrifying. Let’s all just agree here that this movie should probably not have been made in the first place. (There’s probably also a good reason that Paramount also decided to indefinitely shelve the Rugrats live-action that had been pushed back to January 2021.)

As the first glimpses of Clifford began to make their way around the internet, people reacted pretty much how you might expect—with jokes and horror, but mostly horror. And it certainly doesn’t help that it looks like Clifford is literally covered in blood.

Comic artist Jon Rosenberg evoked the far superior Clifford the Big Red Dog animated series on PBS Kids, in which the titular character was voiced by John Ritter until his death in 2003.

At least a few people defended Clifford. They’re not wrong! If the goal was to create a “big red dog,” then consider that mission accomplished.

Given the reaction to the Sonic the Hedgehog live-action and Paramount’s hasty redesign of the character, perhaps there’s a reason we’re getting a “first look” of a movie—that certainly no one was clamoring for—a full year in advance. Perhaps a less rust-colored hue may work better on Clifford the Big Red Dog? Give the ol’ Pantone color wheel another spin, is all we’re saying.