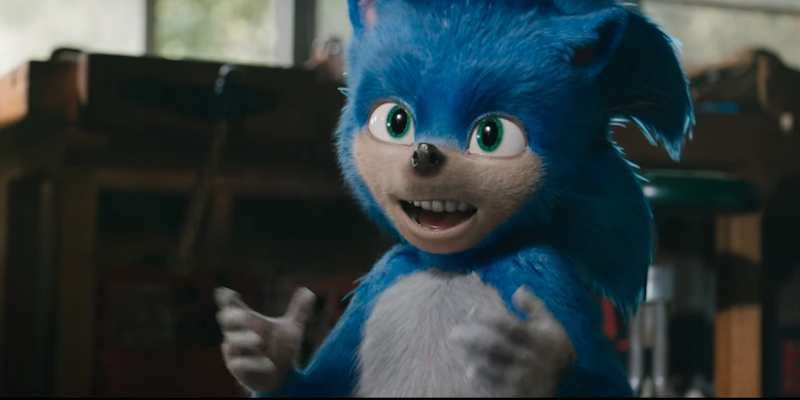 We have our first trailer for the live-action Sonic the Hedgehog movie and reactions have been mixed at best. The downvotes on YouTube are approximately equal to the upvotes, a surprising phenomenon for a trailer that should be primarily attracting people who are predisposed to be excited about the film.

By comparison, the trailer for Pokémon Detective Pikachu currently has 1.4 million upvotes and only 67,000 downvotes.

Chief among the many complaints for the Sonic movie’s trailer is the odd use of Coolio’s “Gangsta’s Paradise” and Sonic’s terrifying mouthful of human teeth. Look at these teeth!

WHY WOULD YOU GIVE HIM HUMAN TEETH pic.twitter.com/1Pjh4DNY6p

WHY ARE HIS TEETH SO HUMAN pic.twitter.com/qanTExwjJI

me when I see those teeth pic.twitter.com/SPB3bBQLBl

Good morning to absolutely everyone and everything other than live action Sonic the Hedgehog’s creepy human teeth xx pic.twitter.com/yJX6WPW7Li

i think
this is just me but i think. that sonic would have looked LESS scary with improbably angry real hedgehog teeth pic.twitter.com/KhnqtGFjjm

This is all that much sadder when you think about Sonic’s history. In the early 1990s, Sega desperately needed a new character to compete with Nintendo’s Mario. The game itself had to be similar enough that kids would know how to play it, but different enough to stand out. Sonic fit the bill perfectly and was a huge success. The original 1991 game’s focus on speed felt like a revelation at the time. Sonic zipped through levels at a pace that made 12-year-old hearts race and saved Sega’s butt at a time when Nintendo’s dominance seemed all absolute.

So maybe the most surprising thing about the new live-action Sonic movie is that it took this long to come out. Perhaps Sega was still frightened by the disastrous 1993 live-action Super Mario Brothers film, which, even after the rosy glow of nostalgia set in, still sits at a dismal 28% fan rating on Rotten Tomatoes.

But given the excitement over Detective Pikachu, the time seems ripe to set Sonic free to play in the human world.

Unfortunately, the trailer shows a movie that seems to rely on every cliché we’ve come to expect from these kinds of films, right down to the “frozen time” segment that we already saw used in its perfected form during X-Men: Days Of Future Past.

Ultimately, horrifying human teeth aside, the real problem with the trailer is that it fails to do what the original 1991 game did so well: Give us something new to be excited about.