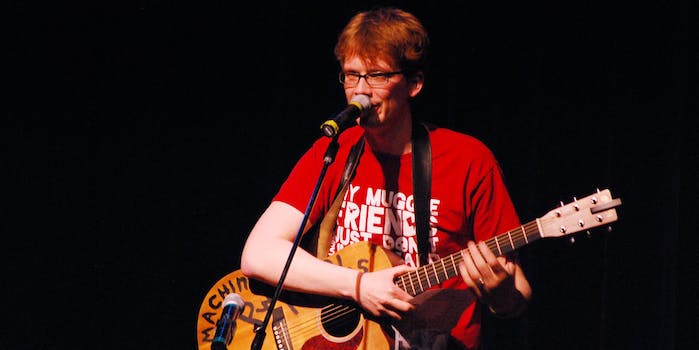 Don’t feel bad about getting someone to click on something if the thing they’re clicking on doesn’t suck.

There, just below the article at the respected news organization that you frequent, is a list of headlines that make you lose faith in humanity. Just before you avert your eyes, you start losing faith in yourself, because you know you’re gonna click “13 Child Celebrities Who Grew Up Ugly.” Why, because in the thumbnail is Mara Wilson, and now you’ve got righteous indignation and confusion piled on top of your ashamed curiosity.

That incongruous thumbnail pairing is just another trick to get the click. Like those all-too-familiar headlines “You won’t believe this one weird trick…” and “Tweleven Reasons Why God’s a Ginger Too… Number Threeve Is Going to Shock You!” and anything containing the phrase “Belly Fat.”

Turns out the goal isn’t to get you to read something, it’s to gain an impression; to push you around the Internet in a psychologically driven, never-ending search for some unknown, unattainable gratification. You get that icky feeling of being lost and alone and completely unable to control your own destiny, and they get ad impressions. It’s a win/win.

But what about the poor saps (me) who do spend money and time on content? I don’t want people to confuse us with that dog vomit, so for a long time I avoided their tricks. I thought those tricks were beneath me. That was communicated to our editorial staff and we did fine, people watched our videos because they were good and because we had a strong and supportive audience.

Then, after almost a year of making SciShow, I had a meeting with our chief editor Blake DePastino and just told basically said: “Clickbait 20 percent to 50 percent of SciShow titles. Just do it. Don’t do it when it doesn’t feel right, but when you can call it a list, or make a justified reason to use the word ‘WEIRD!’ or anything that ends in ‘-EST’ (biggest, best, fastest, grossest, deadliest and… best of all… WEIRDEST!) just do it.” This thumbnail has netted SciShow $8,558.79 as of the publication of this article.

We make good content. We’re not fucking Shark Week. We don’t try to convince people that mermaids exist to sell ads. We should be freaking proud that we get people to click on our videos. The more people click, the smarter they get. We shouldn’t be ashamed of getting people to click on content that we’re proud of.

Those videos we clickbaited did better, and people liked them just as much as they liked our normally titled videos. The people that watched shared them, the shares got more clicks because the titles were clickable. The non-bait episodes started doing better as well. I’m not saying it’s responsible for any particular percentage of our growth, but I know it’s not nothing.

Clickbait it may be, but if you swallow the hook and find a filet mignon (or at least a quarter pounder) suddenly inside your mouth, that is not a problem.

People hate on Upworthy nowadays, but I don’t end up clicking on things my friends think sucked. They convince me to click on things that help me understand the world or give me something to feel good about. That’s a pretty weird thing to get annoyed by. I mean, goddangit Upworthy! I was in a terrible mood until you convinced me to click on that slam poem by a self-actualized, hearing-impaired, transgender schoolteacher with a story that I wouldn’t expect! Damn you! Now I feel better!

Of course, I know that sometimes we write an episode specifically because we know we can make a good headline out of it. If that video is still full of good and interesting science, that’s fine. As long as we continue to invest in good content that increases excitement about and understanding of science, we’re on the right side of this fight, and I have no problem at all stealing from the toolbox of the clickbaiters.

They’re a crafty bunch, and we’re too busy coming up good content to figure out psychological tricks to make people click on things. They’ll just have to do that work for us.

Hank Green is the creator and sometimes-host of SciShow (and also, with his brother, Vlogbrothers and Crash Course). This article originally appeared on Medium and has been reprinted with permission.