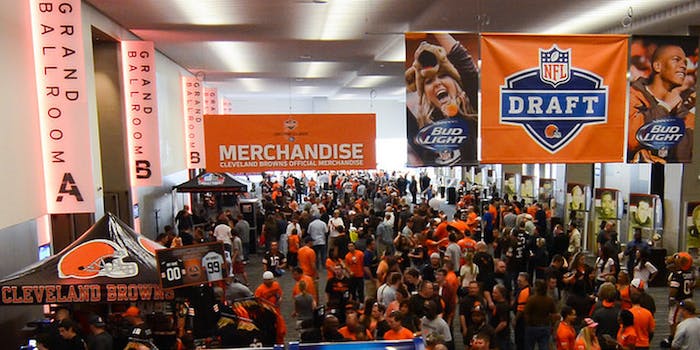 The most Cleveland thing ever.

How good are the Cleveland Browns at this NFL draft thing?

Let’s consider: In 2012, they picked running back Trent Richardson and quarterback Brandon Weeden in the first round. Neither are currently with the team, because both were first-round disasters. In 2014, the team again had two first-round draft picks. The Browns used those selections on cornerback Justin Gilbert and quarterback Johnny Manziel. As I wrote here for Forbes, both of those players have been huge disappointments as well.

So, we’re confident in saying that, in just the past three years, the Browns have not done such a great job with the draft. And that includes the promotion leading up to the one that begins Thursday night.

If you couldn’t tell from the photo, @frankdyrcz1991 is a spambot. It’s a SPAMBOT, Cleveland Browns. A spambot that doesn’t even follow the Browns Twitter feed (though, curiously, it does follow Cleveland Cavaliers superstar LeBron James).

That’s certainly not a great way to end the promotion, and not surprisingly, that tweet from the Browns no longer exists (hopefully, nobody gets fired for that, like the poor man who previously ran the Houston Rockets Twitter feed).

The gist of the contest was that the Browns fan (and NOT a spambot) who could guess the team’s exact regular-season schedule would win two VIP Browns draft party tickets, a personalized Browns jersey, and an Xbox One.

Somehow, @frankdyrcz1991 has proven himself to be quite a predictor of schedules.

Unfortunately, @frankdyrcz1991 was unavailable for comment to dispute or confirm that explanation.

Either way, job well done, Cleveland Browns. In 2014, owner Jimmy Haslam took the advice of a homeless man to draft Manziel. In 2015, you’ve welcomed a spambot to the party. Perhaps in 2016, you’ll reveal that @frankdyrcz1991 was actually that homeless man.