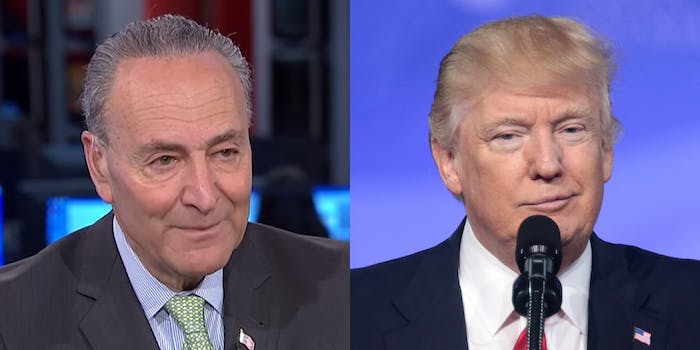 Is there anything more cringeworthy than a politician latching onto a meme?

Is there anything more cringeworthy than a politician latching onto a meme?

Music has meant so much these #Trump100days. Shirelles, @springsteen & more here's my @Spotify #100days playlist: https://t.co/vzRbMTWwmG

The playlist is a spin on the best meme of last week, in which people used Spotify’s vast catalog to spell out weird narratives about dates gone poorly, complaints about the ratio of Chicken McNuggets to packets of BBQ sauce, and, inevitably, the script of Bee Movie. The trend can be traced back to a couple of women, one of whom used Spotify to breakup with a dude, the other using it to confess a crush.

To his credit, Schumer’s playlist appears to actually be something you might consider listening to, with choice cuts from Tame Impala, Solange, and James Blake, among others. But there are some questionable song titles tucked into the two-hour runtime. What are we supposed to make of Drake’s “Hotline Bling” or Beyoncé and Shakira’s “Beautiful Liar”?

Anytime you put the Eagles and John Mayer on the same playlist, you have to wonder who’s really getting trolled.