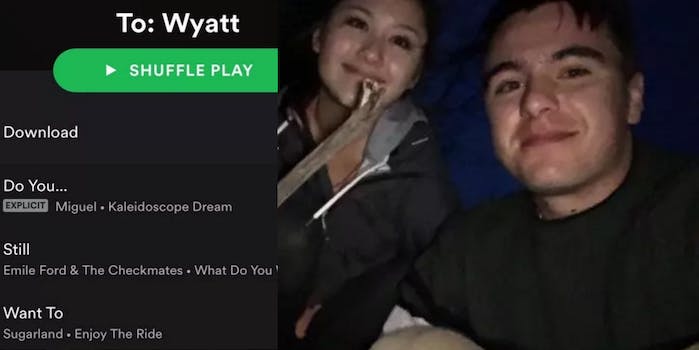 Genius teenager crafts a perfect playlist to dump a dude

This takes dumping someone to a whole new level.

It’s one thing to make a mixtape to memorialize a failed relationship, putting together an assortment of Elliot Smith songs to soundtrack your heartbreak and ensure you never hear those tunes without some wistful nostalgia ever again. It’s quite another to make a playlist to actually break up with someone.

That’s the savage approach taken by Kirsten Titus, a 19-year-old student at Brigham Young University, who pulled a trick out of Spotify’s playbook to send an impossible-to-miss message to Wyatt Hall, a guy she had gone out on a couple of dates with. Instead of picking meaningful songs with lyrics that expressed her doubts about the relationship, Titus just picked song titles that laid bare her intentions.

“I thought if I was going to end things with him I wanted to do it in a creative way,” she told BuzzFeed.

Things took a turn, however, when Titus’ little sister discovered the playlist and put it on blast.

So my sister has gone on a couple of dates with a guy named Wyatt but she likes someone else so she made him a Spotify playlist and… pic.twitter.com/kJmgrUBwqb

Much to Titis’ horror.

To her credit, the playlist doesn’t appear to be public.

Regardless, Hall promptly responded in kind.

I made her one back btw pic.twitter.com/2ekiEAQqz8

I have a feeling Hall has that one on repeat.