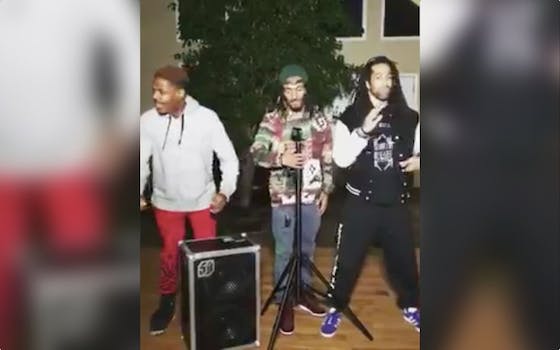 Photo via Bam the Dancer/Twitter

The Rock-a-fire Explosion is back.

Not just any amateur can pull this off. Marquese Scott, playing the lead singer, moves so convincingly that he makes this very video look like CGI. He’s backed by YouTube dancers iGlide and Bam the Dancer.

Although the video is flying around Twitter with the #ChuckECheeseChallenge hashtag, it doesn’t look like anyone else has tried to outdo these guys. It’s only a matter of time, though.

Their performance is most true to defunct ’80s animatronic band the Rock-afire Explosion—famous for its keyboard-tickling gorilla. (In case you’re wondering, the Explosion was phased out in 1992 as Showbiz Pizza was paved over with the Chuck E. Cheese branding.)

Is #ChuckECheeseChallenge the next Mannequin Challenge? Is Childish Gambino‘s “Redbone” the new “Black Beatles?” Probably not, but it would sure be cool to see.