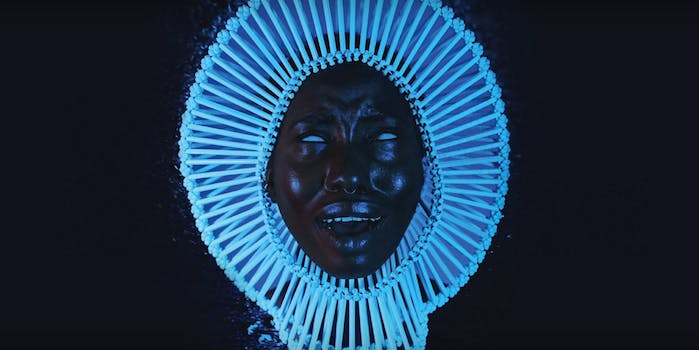 Donald Glover (no relation whatsoever to Danny “I’m too old for this shit” Glover) has completed his full-scale pivot in occupational slashes. He’s gone from talented comedian/writer/rapper you loved to hate, to successful showrunner/Star Wars actor/trending musician you’re absolutely confused by with the release of monstrous, Questlove-approved funk opus, Awaken, My Love!

Dude I'm so fucked up right now. I can't even form the proper hyperbolic sentence to explain to D'angleo why I woke him up at 4am to listen to this. I'm like—when is the last time someone sucker punched me on this level…..I mean I knew #AroundTheWorldInADay was coming & it was a left turn—I'm about to blow the wigs off music historians… but I thought I was getting some fresh millennial 2016 hip hop shit and I got sucker punched. The last sucker punch in black music I remember in which NOONE had a clue what was coming was Sly's #TheresARiotGoinOn—read my IG about it (the flag)—I'm writing in real time cause —Jesus Christ the co-author of #WearwolfBarmitzvah just SONNED the shit outta me. In the best way possible. I was NOT expecting a trip to Detroit circa 1972 at United Sound Studios. I haven't written or been stunned by an album I wasn't expecting since that time I got an advance of #BackToBlack. The music is so lush man, I can see the kaleidoscope color mesh of the #Westbound logo. Dude I can't curb my enthusiasm. All I know is if #P4k try to play him again with these ratings there WILL be a riot goin on.

Glover initially gained moderate acclaim via Upright Citizens Brigade’s Derrick Comedy ensemble, which led to writing for Tina Fey’s hit show, 30 Rock, which led to a mini star-turn as Troy on Community. At the start of his rap career as Childish Gambino, Glover wasn’t taken seriously by anyone except Swedish producer (and main accomplice) Ludwig Göransson (who’s produced all of his proper full-lengths.)

Early releases included his I Am Just a Rapper series, featuring Glover running awkward bars, fueled by PBR-dependent confidence, directly over indie rock hits of the 2010s. His first label release, Camp, while passable in a vacuum, was waylaid by Pitchfork’s Ian Cohen—who dispensed a grudged 1.6 (out of 10) rating.

2013’s self-aware Because the Internet, coinciding with reduction of his time on Community to nil, marked a significant corner-turning. Along with the album’s success, driven by hit single “3005” and head-twisting Prince-like heatseekers, Glover also picked up a shiny development deal with FX, for what became the universally acclaimed drama Atlanta.

Then he dropped this zeitgeist-seizing freestyle on Sway in the Morning.

But Friday’s Awaken, My Love! is the psychedelic crunch of an album no one saw coming. Singles “Me and Your Mama” and “Redbone” are both drenched in Sly Stone-infused cosmic slop and Parliament circa its Maggot Brain superpowers. Sparse and sexual, “Terrified” screams Prince and recalls fan-approved selections on Because the Internet, such as the wavy “III. Urn.”

Abounding with layered textures, “Boogieman” and “Riot”—both sounding equally at home on a Kool & the Gang or Isley Brothers album—saunter in, smelling of mink full lengths and Kool menthols. On the former, Glover touches on the intersectional fear-mongering plaguing society: “If he is scared of me, then how can we be free?”

There are very few missteps, Glover’s use of Auto-Tune in the otherwise sunny “California” chief among them. Disappointing those only searching for arrogant-introvert ‘Bino bars, Glover and Goransson have crafted a stirring, life-giving work that revisits ’70s funk by the truckloads, and spotlights Glover’s improved songwriting and composition.