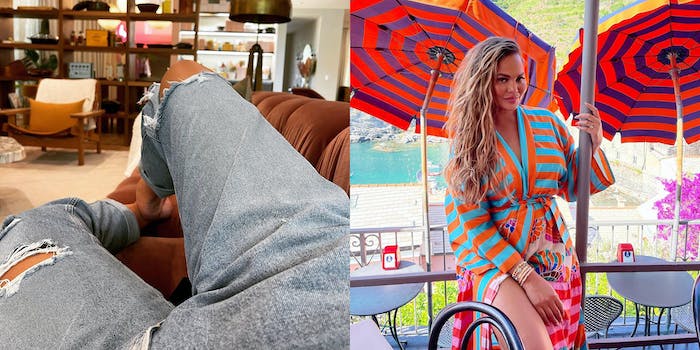 ‘I feel lost’: Chrissy Teigen posts about being part of the ‘cancel club’—and people aren’t impressed

'Give me Chrissy Teigen's money. Ya'll would never see me again.'

Chrissy Teigen took to instagram with a lengthy post about how hard it is to be canceled, just weeks after her past bullying of a then 16-year-old child bride came to light.

The revelations came about when Courtney Stodden, who was married to Doug Hutchison when he was 50 and they were just 16, gave an interview with the Daily Beast. Stodden revealed that in addition to regularly tweeting things like “My Friday fantasy: you. dirt nap. mmmmmm baby,” Teigen would also allegedly DM the teenager, telling them to kill themselves and other hateful things.

Chrissy responded to the article with a four-part Twitter apology, describing her past self as “an insecure, attention seeking troll,” and stating that she was “ashamed and embarrassed at my behavior”. However, for many, even former fans of Teigan, this apology wasn’t enough to redeem her—placing her, as Teigan called it, firmly inside a “cancel club”.

In Teigen’s Instagram post, she also said: “Going outside sucks and doesn’t feel right, being at home alone with my mind makes my depressed head race. But I do know that however I’m handling this now isn’t the right answer.” The response to those comments was overwhelming negative.

To some, it was ridiculous that Twitter unpopularity was enough to seemingly wreck her mental health, especially given everything else she has (money, fame, family).

With the fact that she just had a very Instagrammable vacation to Italy before making the post about “needing to get off her couch” coming up a lot.

Others found her centring of her own feelings rather than the people she’d harmed distasteful.

Though her treatment of Stodden was the final straw leading up to her “cancellation,” it formed part of a larger pattern of Teigan saying unpleasant and outright cruel things in the name of realness and humour—including snide comments on Lindsay Lohan’s mental health struggles and calling then 7-year-old actress Quvenzhané Wallis “cocky”. That her focus seems to have shifted back to how sad the consequences of getting caught have made her feel sits wrong with a lot of Twitter users.

Overall, it looks like it’s going to take more than a carefully posed “relatable” post about how bad being canceled feels to lift her out of the “cancel club” any time soon.