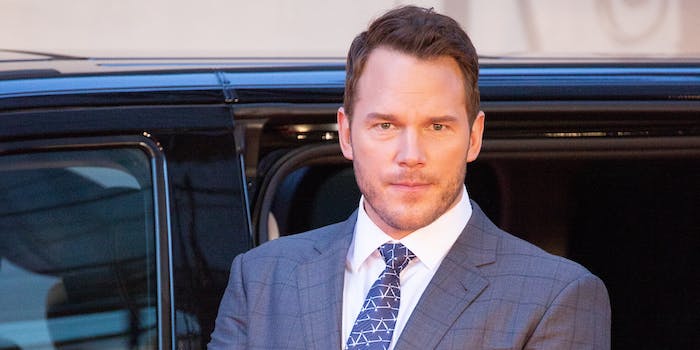 It celebrates his marriage to his second wife, but many found it either 'cringe' or offensive toward his son.

Between his membership of an allegedly homophobic megachurch, and his overexposure with upcoming projects like Garfield and Super Mario, Chris Pratt has become a surprisingly divisive figure. Now, he’s under fire for an Instagram post celebrating his relationship with his wife. On the surface it’s a pretty banal post, but people are calling it out for seemingly promoting sexist ideas about marriage—and for including a cruel subtext about Pratt’s son from his first marriage.

Pratt separated from his first wife Anna Faris in 2017, marrying Katherine Schwarzenegger two years later. Their first child was born in 2020. Thursday’s Instagram post shows the couple posing together with Pratt looking at the camera while Schwarzenegger gazes lovingly up at him, and while it’s a totally standard couple photo, Pratt’s caption caused a stir. As screencaps spread on Twitter, people began to criticize Pratt’s description of their marriage.

The caption simultaneously celebrates their marriage and jokes about how Schwarzenegger does all the work in the relationship. “She helps me with everything. In return, periodically, I open a jar of pickles,” Pratt writes. “It’s her birthday in about 6 weeks. So if I don’t get her anything, I’ll tell her to look back on this post.”

People are accusing Pratt of painting a stereotypical picture of a straight marriage with uneven gender roles, with himself as a careless layabout husband who relies on his perfect angel of a wife, giving very little in return. We have no way of knowing how much this actually reflects their marriage, but the public’s lack of familiarity is part of the reason for the backlash. Most people don’t know enough about Schwarzenegger to guess whether she’s in on the joke.

The post includes a seemingly innocuous reference to their 1-year-old child, with Pratt mentioning that Schwarzenegger gave him “a gorgeous healthy daughter.” He seemingly frames his daughter’s health as a gift from Schwarzenegger, and also implicitly as an achievement. Many are pointing out that celebrating the “health” of his daughter isn’t a neutral comment in a public statement like this.

Many interpreted this as a needlessly cruel comment, because his first child—his son with Faris—was born prematurely and has serious health issues. By celebrating Schwarzenegger for “giving him” a “healthy daughter,” people are accusing Pratt of seemingly proclaiming her superiority to his first wife and of planting the idea (intentionally or not) that Faris might be to blame for her own difficult pregnancy.

This post inspired a lot of backlash, both from people supporting Faris (“Oh Anna Faris dodged a manbaby sized bullet huh”) and people calling out the ableist subtext of Pratt’s caption.

Neither Pratt nor Faris have weighed in on this controversy. The Daily Dot has reached out to Pratt’s representatives for comment.