This is customer service done right.

StumpNuts is a man of simple, comforting tastes. Quality weed, a funny TV show, and the promise of burritos down the line—what more could a guy want?

As explained on the always entertaining subreddit Today I Fucked Up, StumpNuts, as he’s known on Reddit, was recently getting blazed while watching an episode of Parks and Recreation. After dozing off for a few minutes (indica strains will do that), he woke to a confusing commercial that touted a new partnership between Chipotle, everyone’s favorite upscale Mexican fast-food chain, and Exxon, an objectively evil fossil-fuel giant.

“For some stupid reason I was pissed,” StumpNuts wrote. “Hell, Chipotle just took an item off the menu because of the way they were treating animals, how could they possibly justify teaming up with a company who is destroying the planet?!” So he vented his anger in an email to Chipotle’s customer complaint center:

I’m amazed with your company, you pull pork from the shelves because pigs aren’t treated properly, which is awesome! Now you’ve teamed up [with] Exxon, a company who is destroying the planet and laughing about it as they run away from their responsibilities to the environment. Your food is delicious, your moral compass is fucking disgusting.

The exchange that followed was so utterly perfect that we asked him to send us screenshots to prove he hadn’t made it up.

“We definitely haven’t partnered with Exxon,” a rep wrote. “The only thing I can find online that might suggest this is a fake commercial that aired on Parks & Rec recently. Which is an awesome show as far as I’m concerned, but I’m sorry if it caused any confusion!” 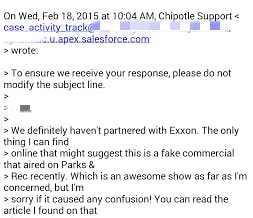 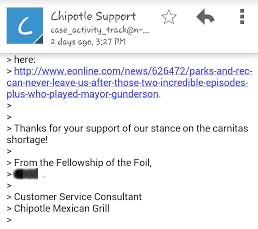 To StumpNuts’ apology—“Wow I’m retarded, I need to stop smoking so much weed”—the rep, who signed off with “Your friend in the burrito business,” had an even better response:

Glad to have set you straight, Alex. The next time the munchies hit, hopefully you can head for Chipotle and feel good about where your money is going. :) 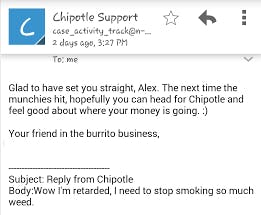 Is this a business that knows its customer base or what?