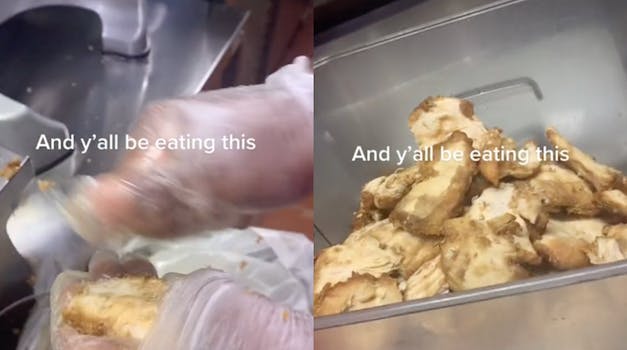 Viewers are not impressed that the video is treated as an exposé.

Fast-food workers have offered glimpses into how some of America’s favorite meals are prepared on TikTok, and, recently, a TikToker shared footage of how the chicken noodle soup at Chick-fil-A gets made. While the user insinuates in their video that they are “exposing” the company, many viewers were left unimpressed with the exposé.

The video shows an employee scraping away the breading from the fried chicken used in Chick-fil-A’s most popular meals. “And y’all be eating this,” the TikToker notes in the caption and via the text-to-speech effect. One worker asks another what the chicken is used for, to which they note that it’s for the chicken soup.

The video has received over 460,000 views and over 15,000 likes since being posted on the platform earlier in July.

Viewers, however, were not impressed that the video was treated as an exposé. “Omg, they’re putting chicken in the chicken soup?” one sarcastically wrote.

Another pointed out that the only thing happening in the video is the scraping of the breading off the chicken—nothing too wild. While this doesn’t leave many surprised, one commenter pointed out a theory that was co-signed by the video’s creator.

“I think the point maybe is that the chicken is old,” the person wrote.

“Exactly,” the poster of the video responded.

The person who uploaded the video could not immediately be reached for comment by the Daily Dot.