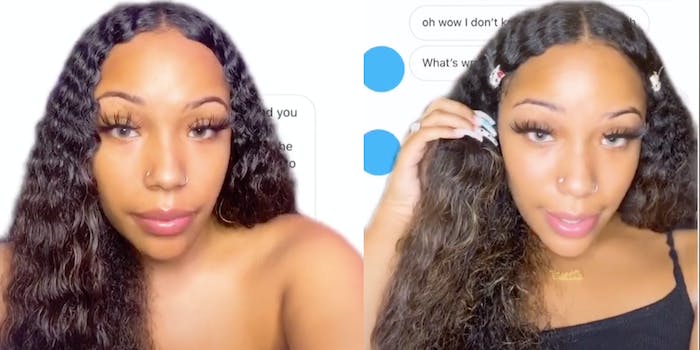 You can hire this TikToker to test your partner’s faithfulness

A woman on TikTok is using the video sharing platform as a method to test the faithfulness of people in relationships.

Chesa, who goes by chesathebrat on TikTok, has been offering up a very specific service on Twitter, TikTok, and Instagram. Upon request, she will DM a potential cheater and flirt. If her target responds in kind, they are labeled “basura”—”garbage” in Spanish—and the offending messages are sent on to their significant other.

Chesa has been putting out her videos for some time now but reached a new level of prominence after several went viral. The videos show Chesa’s process as she engages with her targets.

In one of her most popular videos, Chesa begins by outlining the relationship she will be testing. The woman who reached out to her, according to Chesa, was days away from getting induced and thus giving birth. The father of her child had been distant since the beginning of her pregnancy, so she asked Chesa to administer the test.

She specifically wanted to know if her beau would skip the appointment to meet up with another girl.

Chesa accepted the challenge and initiated a conversation with the boyfriend. The pretend flirting quickly paid off when she asked if he was single. The soon-to-be father promptly answered in the negative.

“This is where I thought he was going to say ‘I have a wife,'” Chesa said.

Unfortunately, she was wrong. After a bit more flirting, he agreed to meet up with her.

Chesa specifically asked if he was available at 1pm the next day—the same time his child was allegedly set to be born. He didn’t agree to skip the appointment, but that doesn’t make his response any better.

“Yeah okay that’s fine,” he wrote. “At 1 I just have some bullshit to take care of then after that I’m free. What’s your number?”

The cheater was accurately labeled “basura” and tossed out where he belongs.

Following the video’s rise to mainstream popularity, viewers have been stumbling across Chesa’s other videos. Her TikTok is home to a truly upsetting number of videos taking down cheaters.

Thankfully, not all of her targets fall into the trap. A few of Chesa’s videos revealed partners who were entirely faithful. Unfortunately, these were few and far between.

After one of Chesa’s TikToks went viral on Twitter, she clarified the bounds of her service.

“So if y’all didn’t know already i do tests on boyfriends AND girlfriends to see if they are faithful,” she noted.

Chesa does not appear to charge for her service, as no discussion of a rate appears on either her Twitter or TikTok pages. Instead, she seems to employ her test as a method to free people from toxic relationships.

The Daily Dot reached out to Chesa, but she did not respond to the interview request before publishing time.