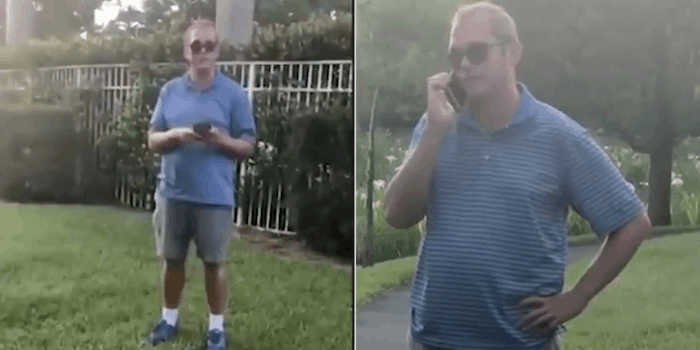 While on the phone with cops, the man insinuates that she could be a criminal by claiming he's not sure whether she is 'looking for open garages.'

A Haitian woman riding her bike in a gated community in Florida had the police called on her by a white man who questioned whether she belonged in the neighborhood.

The man, whose first name is Tom but has since been dubbed “Palm Beach Ken,” can be seen questioning Roz Joseph in a video uploaded to Facebook last week.

The video shows the man repeatedly demanding that Joseph reveal whether or not she lives in the community.

As the argument intensifies, the man at one point even tells Joseph to “speak English, you’re in the fucking United States of America.”

While on the phone with police, the man insinuates that the woman could be a criminal by claiming that he’s not sure whether Joseph is “looking for open garages.”

In an update to her post, Joseph states that she later contacted police as well.

“My husband & I had to call officers as we wanted the incident documented,” she writes. “No crime was committed (at that point he went back home) so they were unable to do anything but did advise on how to move forward if we continue to be harassed.”

Joseph goes on to state that she and her husband wrote a letter “to our HOA board and property management company asking for this to be addressed.”