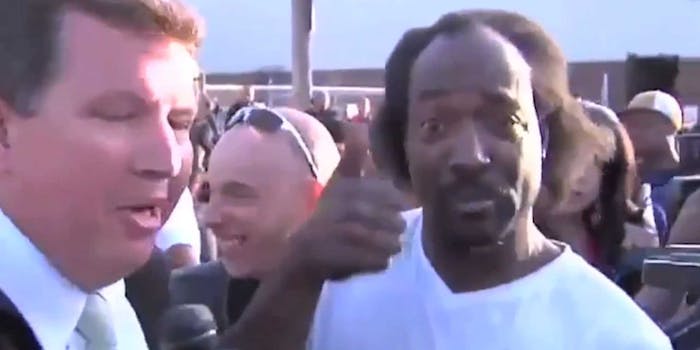 Charles Ramsey gets the Auto-Tune remix a hero deserves

The Gregory Brothers couldn't leave this one alone.

At this point, whenever we’re introduced to an interesting interview subject, we expect them to get the Auto-Tune treatment within a day or two of their YouTube debut. And once that comes out, we’re fixated more on how they sound rather than what they have to say.

Plenty of people have tried their hand at Auto-Tuning Ramsey—Jonathan Mann came out with his own version on Tuesday as part of his Song-a-Day project—but when it comes to songifying their subjects, the Gregory Brothers set the gold standard.

The Gregory Brothers, composed of brothers Andrew, Michael, Evan, and the latter’s wife, Sarah, have already made Antoine Dodson, Paul “Bear” Vasquez, George Lindell, and Kai the homeless hitchhiker into viral stars, and turned just about every major televised political event from the last election into a musical spectacle.

Now they’ve given Ramsey, who rescued Amanda Berry, Gina DeJesus, and Michelle Knight in Cleveland, Ohio after they’d been missing for more than 10 years, his turn in the spotlight.

The song is called “Dead Giveaway” and focuses in on one line of dialogue in particular: “Bro, I knew something was wrong when a little pretty white girl ran into a black man’s arms…dead giveaway. Dead giveaway.”

They also latch onto Ramsey’s other golden quote early in the song: “You got some big testicles to pull this off, bro.”

They used Ramsey’s interviews with the local ABC and Fox affiliates and showed how he never suspected the three kidnappers, including his neighbor Ariel Castro, were keeping the three women in the house for all this time.

But now we know. And knowing is half the battle. The other half is getting this tune out of my head.