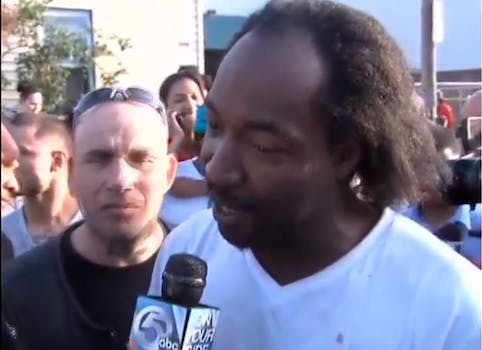 Charles Ramsey is more than just a hero. He’s an interview hall of famer.

On Monday, Ramsey rescued three women from their captor when he heard screaming emanating from his neighbor’s house in Cleveland, Ohio. The women in question—Amanda Berry, Gina DeJesus, and Michelle Knight—had been missing for more than 10 years. All three of them were were found to be in good health.

Ramsey told local ABC affiliate Newsnet5 that he ran to the the adjacent home when he heard someone yelling from inside begging for help.

“I go on the porch and she said: ‘Help me get out. I’ve been here a long time.’ I figure it was domestic violence dispute.”

The screaming woman was Amanda Berry, who was last seen in 2003 after calling her sister to let her know she was getting a ride from work.

Ramsey called 911 and was told who he had rescued by police officers who showed up at the scene. His heroics resulted in the arrest of three men, including his 52-year-old neighbor Ariel Castro.

They also yielded the amazing video below, which is laden with memorable quotes.

As for the best line from the video, it’s a toss-up between “You got some big testicles to pull this off, bro,” and “Bro, I knew something was wrong when a little pretty white girl ran into a black man’s arms.”

Ramsey joins Kai, the hatchet-wielding homeless man who saved the lives of two individuals back in February 2013, as charismatic saviors who are should be commended for their valor as well as mad interviewing skills.