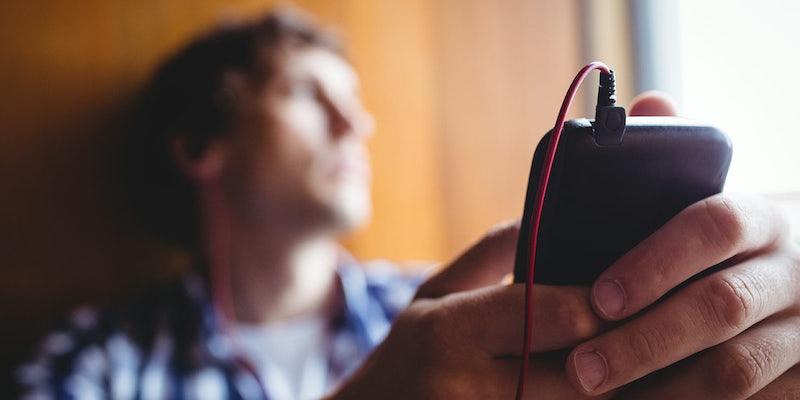 The ‘Chapo Trap House’ podcast is ruining this woman’s relationship

This is a sordid tale of progressive dating.

As Bernie Sanders challenged Hillary Clinton for the 2016 Democratic presidential nomination, a new political force arose online. Not quite Bernie Bros but definitely male and progressive, the so-called “dirtbag left” is a group of media figures who bring a new irreverent and ironic tone to the discussion on the left. Dismayed at the right and the institutional left alike, they look at politics through the obscene and absurd in the simultaneously intellectual and disaffected tone Twitter absolutely adores.

The leader of the pack is the podcast Chapo Trap House, helmed by Weird Twitter power users who have cultivated a devoted following on the internet: 30,000-plus Twitter followers and roughly 11,500 podcast subscribers who contribute more than $65,000 a month for their podcast. And though they’ve been considered offensive by some and insensitive by others—attempting to push the base of the Democratic party as far left as possible—they’ve never been known to cause public distress among couples. Until now.

A tale on Reddit of how Chapo Trap House is destroying a relationship is going around Twitter. And it is truly something else.

Get ready for a wild ride of love, disillusionment, flummoxing gender roles, and using quotes from podcasts to solve communication problems with your significant other.

From the now deleted post (beware, it’s a bit involved):

My boyfriend and I have been dating for about 5 years. We get along very well and he is very kind, caring, sweet, our sex life is great, we rarely ever have serious fights, etc.

When we met just after graduating, we were both underemployed creative types with somewhat useless art-school degrees; since then some combination of luck and hard work on my behalf has meant that I started to have a decent career (marketing for a tech company) and now make a decent salary (~$65k.) I am a photographer on the side which is what I (stupidly) went to school for, but I don’t mind my day work, and I think I am lucky to have a good work/life balance. I don’t know if I will ever make good money on my creative pursuits but I am happy I still get to do that on the side and I generally like my day job well enough.

My boyfriend, however, has just been temping since he graduated 5 years ago, but very rarely gets more than a few days here or there. He works on some creative projects (painting & sometimes writing), but never seems to finish anything and does not make any money off it. He also recently got taken off his parents’ health insurance, so he has none, which worries me as much of his family is diabetic and he has had some health issues in the past. His parents are pretty wealthy and will help him out in a pinch with things like rent and health expenses. (I do not have this luxury, my parents do not have money. His family isn’t, like, crazy loaded but they have a nice house and go on loads of vacations and his parents drive BMWs and give him any money he asks for, etc.)

For a while this didn’t really bother me—again, we were both recent art school grads when we started dating, being broke is kind of par for the course—but since we’ve moved in together 2yrs ago, it has started to bother me. We were happy when we were both young and broke, but I am getting to a point where I would like to do things like go on a vacation or buy kitchen chairs instead of sitting on apple crates. It would make me feel great if he was able to contribute to things like this as well. But I feel very bad because he doesn’t seem to care about these things and always says I am being very bourgeoise.

So far, just your standard couples’ stuff. One person is carrying water, one is complacent, and they’re both sort of disaffected. But this relationship has one twist you didn’t predict. The original poster’s man is a podcast addict. But not just any podcast addict. He’s a dirtbag left podcast addict. With one more added twist. For all the progressive values of Chapo Trap House (CTH), this bro embodies none of them. At all.

These conversations have been exacerbated in recent months due to politics. He and I are both left-leaning people, but he recently has become very obsessed with a series of popular far-left podcasts, and while I don’t disagree with much of their politics I find them very abrasive, and I find him constantly parroting them back at me. It feels like every conversation now begins with “Well today on CTH so-and-so said,” and every serious conversation about money or healthcare or rent or work ends in “The spineless Democrats couldn’t commit to actual socialist change and Obamacare didn’t do enough to make healthcare accessible, I can’t possibly get health insurance” or “Neoliberalism has just totally fucked the job market, what do you want from me? Until the state actually makes an investment in the people, it’s basically impossible,” or whatever. These don’t devolve into crazy screaming matches or anything, but it just is starting to bum me out that any conversation I try to have that involves any sort of financial/family/health planning just always gets shut down with a snide remark about how the system is fucked and there’s nothing he can do.

I also find it annoying that he had little-to-no interest in politics before this and was not at all politically active; he’s honestly not even registered to vote. Regardless of your political leaning left or right, I find it a little upsetting to be lectured by anyone who refuses to participate in the system because “it’s so broken.” (I am not an especially outspoken person but I do vote in local and national elections, volunteer in my community, and regularly give money to causes and charities I care about.)I feel shitty because he thinks I’m being very bourgeoise and making too much of a big deal over money, which is the last thing I want to do. But it’s starting to make me feel crazy.

I also sometimes get the feeling that he resents me for “selling out” or something like that—that I’m “part of the problem” because I have a corporate day job. On top of that, I think I sometimes feel resentful since as a white dude who comes from a lot of money, I feel that life has given him more opportunities than me (child of immigrants & female) and it frustrates me—I know that’s not always just how the system works, but it really does feel that I have had to work much harder for many things.

Left Twitter jumped all over this sordid tale of a woman having a decent job and a shitty boyfriend addicted to Chapo Trap House.

To people, this tale had everything. Predominate among it, though, was irony.

Guy living off his gf and parents has nerve to call others bougoise.

For her part, the original poster was surprised it took left Twitter by storm. She said she’s not a Chapo fan herself. “I find it sort of abrasive and mean-spirited, to be honest,” she told the Daily Dot over a series of DMs from her Reddit account, anotherthr0waway2222, which has only been in use 27 days. “I mean, they’re definitely smart guys, but I feel like I’m just not snarky enough to truly appreciate it. They’d probably make fun of me for being too earnest or something.”

It’s certainly true. And she’s sort of blown away by how much fans of the show jumped on this one tale, retweeting it left and right.

“I think people really blew it out of proportion,” she wrote. “It’s not as if he just sits on the couch with his dick in his hand and his podcasts blaring, gaming and yelling at me 24/7 or whatever people are picturing. But that seems a lot juicier than “I’m kind of frustrated and my unemployed boyfriend shuts down serious conversations with podcast quotes once or twice a month and thinks it’s a shallow waste of money to make the house look nice, does anyone have advice?” I understand the irony they’re seeing there, and obviously, I was frustrated by the situation, but everyone has something contradictory in their personality.”

That’s why people wanted to get the unidentified male to go on Chapo Trap House and tell his side of the tale.

The post has since been deleted because, as noted on Twitter, the way this went around fans of Trap House, there’s almost no doubt he’ll see it. In fact, the poster told the Daily Dot she was worried by all the attention, which is why she got rid of it. That was probably the right move, as the man became a meme in his own right.

(Marine Todd is an infamous fake tale about a marine punching a professor in the face to prove the existence of God.) But for as popular as Chapo is, it is also very divisive, and there were many opinions that no woman should ever have to date the sort of myopic Bernie Bro who listens to a new left podcast.

There were twists everywhere in this tale.  Like maybe the issue was really the woman? How, indeed, could a Chapo fan (they call themselves Grey Wolves), be dating someone in the evil field of tech?

the real joke here is that a wolf is dating someone who does "marketing for a tech company!!!!"

not just does but somehow *enjoys*, she is a true monster

Or maybe he’s the only real enlightened one?

But some people thought the matter really got at the ethos of the new left—that for all their posturing as progressives, they really are just the same shitty dudes as always. It’s something even the Chapo dudes themselves might admit. (The hosts contacted for this article did not respond to our request for comment.) They wouldn’t be the dirtbag left otherwise.

The poster disagreed with that characterization when speaking with the Daily Dot. “I think it’s kind of dangerous to be, like, ‘all hashtag berniebro brocialists chapo grey wolf dirtbags are entitled lazy misogynists’ because that’s obviously not true. I do think it’s probably telling that a lot of the fans happen to be young white dudes, but I don’t think it’s useful to draw any grotesque caricatures or sweeping conclusions.”

In the end, all that really matters was this good pun.

And as to whether she is still with her boyfriend, despite all the advice to dump him, she said she is. “A few people suggested that I nudge him towards volunteering or getting a union job, which I thought seemed like good advice,” she wrote. “The Internet loves to be all ‘DTMFA’ but it’s really not that simple.”