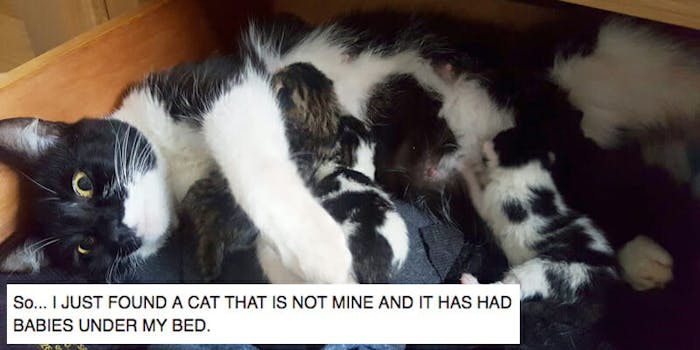 Congratulations on the new babies!

There are many factors to decide when approaching the decision of pet ownership and adoption, such as what kind of pet—whether cat, dog, or otherwise—best fits your lifestyle, is most well suited for your home, and falls within your financial budget.

And then sometimes, life comes at you fast.

Such was the case with indie filmmaker Paris Zarcilla, who went to grab a sweater from his bedroom in his London flat yesterday and discovered a cat under his bed that did not belong to him… And she was, uh, with kittens.

So… I JUST FOUND A CAT THAT IS NOT MINE AND IT HAS HAD BABIES UNDER MY BED. pic.twitter.com/83ktBHGgT5

As Zarcilla began to grapple with his newfound “catshit crazy reality,” he continued live-tweeting his kitty ordeal.

Trying to adjust to the catshit crazy reality of going upstairs to grab a jumper but instead finding a cat and 4 kittens. Am I dad now?

Paternal instincts kicking in. Overwhelmed with feels. Don't know how to deal.

Cancelling all my plans. Crawling under the bed to spend the rest of the day with my four new children. #newdad

Okay, so actually maybe there wasn’t all that much grappling to be done. It quickly became apparent that Zarcilla was smitten with the babies.

I am living for these babies.
Any work commitments I have are now temporarily on hold. Sorry I'm a dad now.

I feel like the veil of the universe is being lifted slightly. Like, I feel high. Is this what it feels like to have a child? I think I'm falling in love. Fuck. pic.twitter.com/0ObNMNt4vC

To my cat sons and daughters, I'll be the hero you deserve, but not the one it needs right now (because of mama cat). So I'll hunt for you, because I can afford it. I'll be your silent guardian, your watchful protector. Love, #CatDad pic.twitter.com/JkaUpGzXCP

I think I'm living the best day of my life. Wait, no. Actually fuck it yes I am. This is the best :') pic.twitter.com/1P4eryHLyw

In the cold light of day, however, Zarcilla realized that there were phone calls that needed to be made, and he learned that the momma cat shouldn’t be separated from her kittens for at least six weeks. And that meant that he couldn’t take her to a vet or shelter to be scanned for a chip.

Although the kittens can’t be spayed or neutered for four months, apparently in England it’s illegal to alter a cat that doesn’t belong to you, so right now he has no way of knowing whether or not the cat (and her babies) legally belong to someone else.

This in itself triggered an entirely different existential crisis.

Beginning to experience the dread and emotional turmoil of the idea that I might have to give up the fluff blessings at some point. This may be someone's cat and I don't want to take away this joy from anybody. But my dad instincts have kicked in so hard. Fuck. I want this

Listen, I'm sorry I haven't named them yet. Naming them makes it a full on commit. Don't get me wrong I'm here for this queen. But that's giving 100% of my heart and if they have to go that's 100% heartbreak. #CatDad #problems

Given the proliferation of stray and unwanted cats in urban areas like London, it seems highly unlikely that Zarcilla will be able to find an owner for the cat.

So as this story continues to develop, we’ll cross our fingers anyway and congratulate him on his new family, anyway.