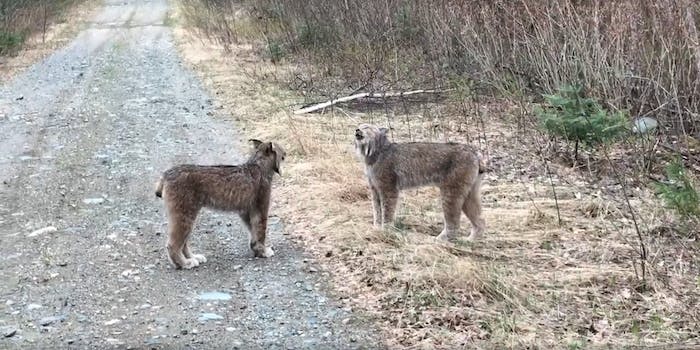 The internet is obsessed with this lynx screaming match

These lynx have a lot to say to each other.

When two lynx met up on a dirt road in Ontario, Canada, they had a long “conversation” about something, but no one is really sure what.

Edward Trist, who lives off the grid in Ontario, was on his way to go fishing with his daughter and girlfriend when they came across the two big cats screaming—yes, screaming—at each other in the road.

“They didn’t move, which was really odd,” Trist told Global News. “We got out and started filming it … What we caught on camera is very, very rare to catch.”

just another eve at Avery lake!!so cool and SO RARE to come upon this!!

“I think it could be the beginning of a mating ritual, because despite the cursing they are also head-butting, which is a friendly greeting,” Carole Baskin, founder of Big Cat Rescue, told BuzzFeed News. “It could also be a nearly grown kitten of the mom saying, ‘Remember when we used to go hunting together?’ And she’s telling him there’s no free lunch anymore.”

Steve Boutin, a biology professor at the University of Alberta, said that while the animals aren’t really territorial, this is typical behavior when two lynx meet by chance in the woods.

“It’s fairly rare, but you do in fact hear them,” Boutin told the BBC News. “I don’t think they actually come together and fight very often with actually engaging each other, but this ritualized behavior goes on for a while and then one finally backs down and they move off.”

Regardless of what the giant cats are actually going on about, people on social media were fascinated with the interaction.

I asked a zoologist who researches lynx whether that video of them making human noises is real.

Folks, seems like it is. Enjoy it at will. pic.twitter.com/Tlzd5bWCNd

Another example why Canada is so cool.

I will never get used to the weird ass noises Lynx make… imagine hearing this at night in the woods pic.twitter.com/bkWSrXBFQI

In his interview with Global News, Trist noted that not everyone believed the sounds were real.

“People were saying online, ‘well, it sounded like it was dubbed,’ but that’s what they actually sound like,” he said. “It’s almost comical if you watch it. It sounds like a couple kids narrating in the background, but it was all live, and we caught it.”