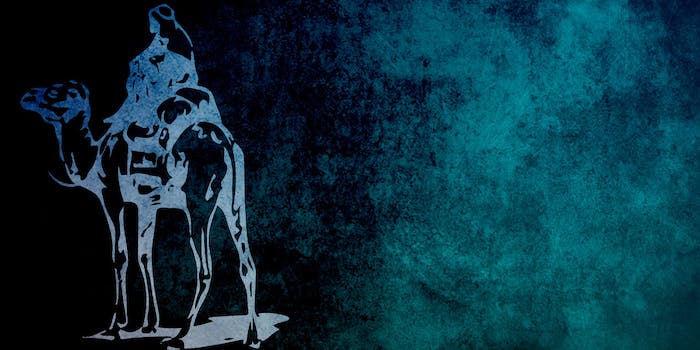 Carl Mark Force IV, a 46-year-old former Drug Enforcement Administration (DEA) officer, has been charged with wire fraud, theft of government property, and money laundering. He allegedly sold information about the government investigation and stole over $500,000 in bitcoins, the digital cryptocurrency, for himself during the federal investigation into Silk Road.

“The fact that Ross’ attorneys were not permitted to use this important information at trial was devastating to Ross’ defense,” mother Lyn Ulbricht told the Daily Dot. “These revelations of corruption cast doubt on the integrity of the entire investigation and the government’s case, including accusations of murder-for-hire, which we have always been certain were false.”

Force, who was central to the investigation of Ulbricht and Silk Road, played the single biggest role in the most damning charges leveled against Ulbricht: allegedly paying for the assassination and torture of a once-trusted confidant.

Force, by his own admission, was the Baltimore-based undercover agent who established and cultivated a 17-month covert relationship with Dread Pirate Roberts (DPR), the pseudonym Ulbricht is said to have used while operating Silk Road, that ended with Ulbricht being charged with murder for hire, an accusation he still has yet to face in court in Maryland. On Silk Road, one of Force’s psuedonyms was Nob.

Ulbricht, who was convicted of operating Silk Road in February, maintains that he is not Dread Pirate Roberts. He is currently awaiting sentencing and is working to appeal his conviction.

In May 2012, Force registered on Silk Road as a major cocaine dealer, under the name Nob, who claimed to move massive quantities of the drug. After complaining to DPR that Silk Road users only buy small batches, DPR successfully found a major buyer for the undercover agent’s goods.

The buyer was Curtis Green, a salaried Silk Road employee who was ready to buy a kilogram of cocaine from Force. Green provided his address to receive the drugs. Soon, Green’s home was raided, his house was seized, and he quickly became a law-enforcement informant.

Somehow, DPR found out that Green had been arrested and flipped just days after it happened.

DPR asked Force, who was posing as the cocaine dealer Nob, to torture and kill Green. After three weeks of negotiations, DPR paid $80,000 for the hit. Force then sent him staged photographs of Green being tortured and murdered with the explanation that he died of “asphyxiation/heart rupture while being tortured.” Force added that Green’s body was “completely destroyed to eliminate evidence.”

It is currently unclear whether Force sold information about Green’s arrest to DPR.

However, in 2014, Force allegedly told DPR about another Silk Road investigation in which Mark Karpeles, the owner of the Bitcoin exchange Mt. Gox, offered to cooperate with American authorities. Force, under the name “French Maid”, charged DPR $100,000 for the information, which was allegedly paid in full to Force’s personal accounts.

Force, a self-described Bitcoin and cryptography expert, didn’t do much to keep his role a secret. In fact, he openly described his undercover role on LinkedIn where he promoted himself and his Bitcoin startup Engedi LLC, which he administered alongside his work at the DEA. 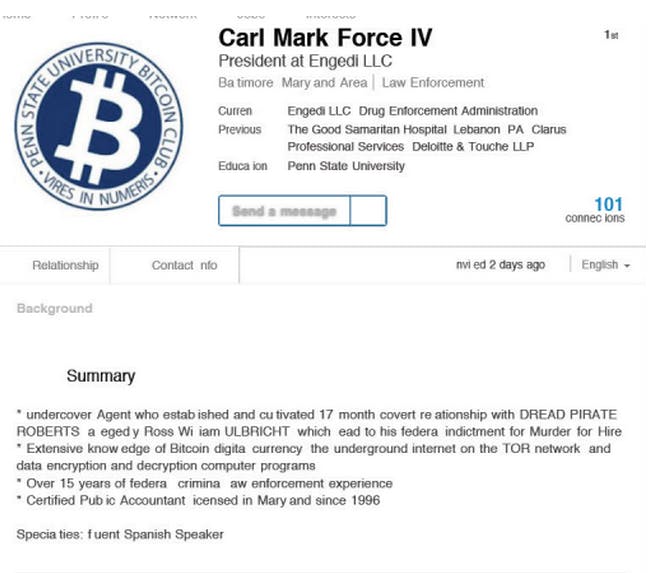 Through Engedi, Force built and sold Bitcoin mining machines. He also advertised his aptitude for “forensic investigations for corporations” and law enforcement.

Although Force eventually realized his mistake and deleted his LinkedIn page last year, it had already long since been saved by curious readers. Force’s name and social media accounts have been passed around on the Dark Net for months. Several media outlets, including the Daily Dot, were investigating his role in the Silk Road investigation at the time of his arrest.

Correction: An earlier version of this article incorrectly identified the full name of the DEA. It is the Drug Enforcement Administration.