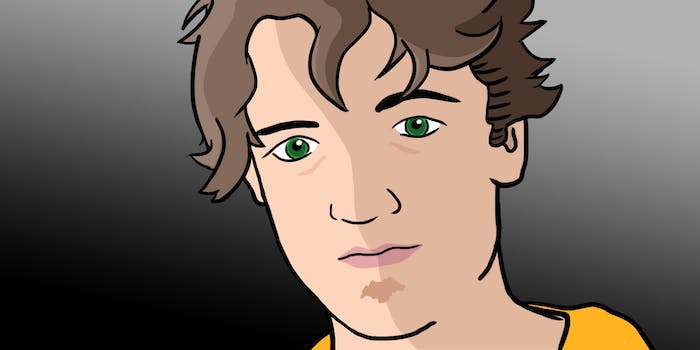 He faces life in prison.

Ross Ulbricht was convicted on Wednesday of running Silk Road, a Dark Net black market that became over a $100 million Internet phenomenon before Ulbricht’s 2013 arrest.

After three hours of deliberation, the jury found Ulbricht guilty on all seven felony charges he faced, including drug trafficking, continuing a criminal enterprise, hacking, money laundering, and fraud with identification documents. He faces up to life in prison for these convictions.

There is also a murder-for-hire charge looming large for Ulbricht in Maryland courts relating to what prosecutors say was an attempted—but failed—hit placed on a former employee. The supposed hitman was actually an undercover agent, and the murder, which cost $80,000, was allegedly staged with fake blood and photographed for Ulbricht’s approval.

Prosecutors say Ulbricht began to create Silk Road in 2010. By 2011, it was making headlines around the world and two U.S. Senators demanded law enforcement shut it down. In 2013, amid a growing air of invincibility among Silk Road users, Ulbricht was arrested in a San Francisco library while logged in as the administrator of Silk Road.

Among the many high-profile arrests surrounding Silk Road, Ulbricht is the only one who pled not guilty and took his case to trial.

Ulbricht’s defense claimed that while he did create the site, he sold it off at an unspecified date to an unknown third party because it was “overwhelming” to run such a massive and illegal business. It was during this time, when Ulbricht claimed he was away from Silk Road, that many of the specific crimes he was charged with were committed, the defense claimed.

Ulbricht’s defense suffered a series of massive blows throughout the trial. His family has repeatedly stated that they believe evidence favorable to the defendant has been suppressed and, crucially, that the jury is not getting the full story. Specifically, they point to a years-long Homeland Security investigation that considered several other suspects before an agent from the Internal Revenue Service identified Ulbricht as the lead suspect.

Joshua Dratel, Ulbricht’s lead defense attorney, tried but failed to convince jurors that the Internet-based evidence provided by the prosecution was entirely unreliable, that thousands of pages of damning chat logs and spreadsheets were planted by a malicious hacker in an incredible and successful effort to frame Ulbricht, who the U.S. government says ran Silk Road under the moniker Dread Pirate Roberts (DPR), as federal agents closed in on Silk Road.

“There’s so much to question in this case,” Dratel argued. “There are a lot of blinking neon signs in this case that were created to incriminate Mr. Ulbricht, and I submit to you that DPR was doing it.”

Prosecutors derided Dratel’s case as an “incredible fantasy,” an “absurd” and “desperate attempt to create a smokescreen” of doubt despite mountains of evidence produced by the government and almost none produced by the defense.

Dratel repeatedly hit unsurmountable roadblocks throughout the trial, as the judge severely limited how he could argue Ulbricht’s case at the prosecution’s request.

Several jurors nodded their heads in a approval as prosecutors gave their closing arguments. Members of Ulbricht’s family, looking tired, shooke their heads “no” in response.

Perhaps most important, prosecutors said, was the fact that even if Ulbricht’s case was true, he was still legally guilty. If someone spends one minute in a criminal conspiracy, they’re liable for everything that happens in that conspiracy thereafter.

This story is currently developing.