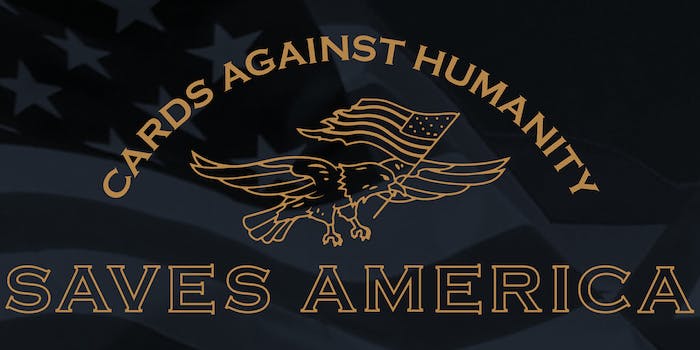 Cards Against Humanity’s marketing campaigns are usually trolling someone. There’s the time the company managed to convince thousands of people to buy a box of bull poop during Black Friday. Over the summer, it sold a pink-colored version of its popular party game for $5 more, which satirized products sold specifically for women. Now, Cards Against Humanity is taking a stand against President Trump and trying to save America. Literally.

On Tuesday, the company announced a new website, which details its holiday campaign.

The government is being run by a toilet. We have no choice… we are going to save America and attempt to keep our brand relevant in 2017

Join in and for $15 we’ll send you six America-saving surprises this December: https://t.co/o1BFmokO9W

We are back on our bullshit: https://t.co/Im3XTvoezM

For $15, the company will send you six surprise packages during the month of December.

According to the FAQ section of the website, “The surprises contain no sexual content, graphic violence, or footage of Donald Trump watching Russian prostitutes urinate on a bed Obama slept in. They do have some naughty words, though.”

The website also states that Cards Against Humanity purchased a plot of land on the U.S./Mexico border in an effort to halt Trump’s border wall, teasing part of the Day One gift:

Donald Trump is a preposterous golem who is afraid of Mexicans. He is so afraid that he wants to build a twenty-billion dollar wall that everyone knows will accomplish nothing. So we’ve purchased a plot of vacant land on the border and retained a law firm specializing in eminent domain to make it as time-consuming and expensive as possible for the wall to get built.

On Day 1, all Cards Against Humanity Saves America recipients will get an illustrated map of the land, a certificate of our promise to fight the wall, some new cards, and a few other surprises.

The company released a video that depicts what America will look like after the country is saved by Cards Against Humanity (featuring an aging millennial). “They stopped Trump’s border wall, solved the problem of fake news, and ended the creeping scourge of homework,” the narrator of the video says.

The best part of Cards Against Humanity’s promotion is the survey it makes customers fill out before completing an order. Here’s are a couple of the questions on the survey:

Your answers will probably determine what kind of gifts you receive.

The promotion will probably sell out, so if you’re into this kind of thing, you should order quickly.