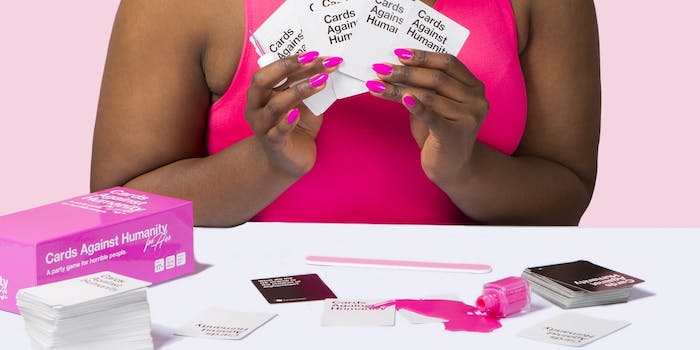 Photo via Cards Against Humanity for Her

It's $5 more and pink because women 'are worth it.'

The makers of Cards Against Humanity have always excelled at creating an engrossing, absurdist gaming experience, winning the loyalty of their customers with expansion packs that make the party game’s irreverent humor last all night long.

Now, they’re offering what is perhaps their most ingenious update yet—a pricier carbon copy of the original game that comes in… pink packaging.

True to its name, Cards Against for Humanity for Her is “exactly the same as the original Cards Against Humanity game, but the box is pink and it costs $5 more.” It cleverly pokes fun at gender-based price discrimination while subtly clapping back at the ridiculous notion that women need to occupy themselves with games while men talk about “serious” things. “Everyone hates it when the men retire to the parlor to discuss the economy and the various issues of today,” the game description reads. “What are us ladies supposed to do?”

Well, you can buy this lady version of the game. Here are are some reasons why:

Also, Cards Against Humanity is donating all its proceeds from its Her edition to Emily’s List, which helps pro-choice Democratic women get elected into office. So put on your prissiest dress and pour yourself some slushy cocktails, you’re having a girls’ night in.