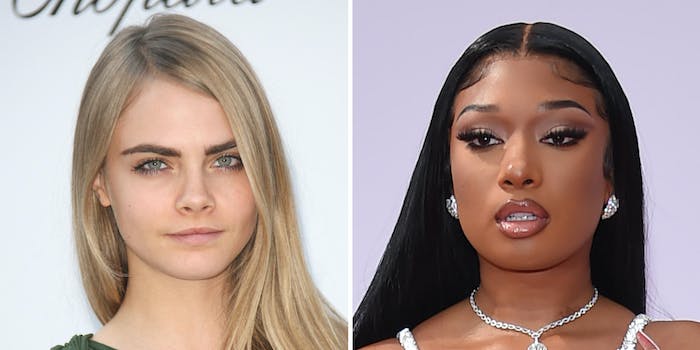 She stayed close to Megan Thee Stallion during the event, and people noticed.

Plenty of celebrities made a big splash at the Billboard Music Awards on Sunday night, but it was Cara Delevingne and Megan Thee Stallion whose appearances went viral and sparked a wave of memes.

As Megan Thee Stallion posed on the red carpet, Delevingne emerged to lift the train on her outfit so that it dropped in a dramatic fashion. When photographers urged Delevingne to do it again, she obliged.

They also sat next to each other during the ceremony with the BBMAs capturing much of the action, whether it was an interaction between Delivingne, Megan Thee Stallion, and Doja Cat during a break in the show or Delivingne getting down on the ground to capture a photograph from a different angle.

Megan Thee Stallion and Delevingne previously went viral at a Met Gala afterparty, and videos that emerged led to some calling Delivingne out for appearing to invade Megan Thee Stallion’s personal space. While that sentiment was still there, the observations took a more humorous tone this time around.

Some people began to use clips from various movies and shows in order to suggest an element of horror in Delevingne’s appearances.

Even clips that had nothing to do with horror movies but still showed characters in states of panic were popular.

Megan Thee Stallion, who was at the BBMAs as a nominee and performed “Plan B” and “Sweetest Pie” during the show itself, won the award for top rap female artist.