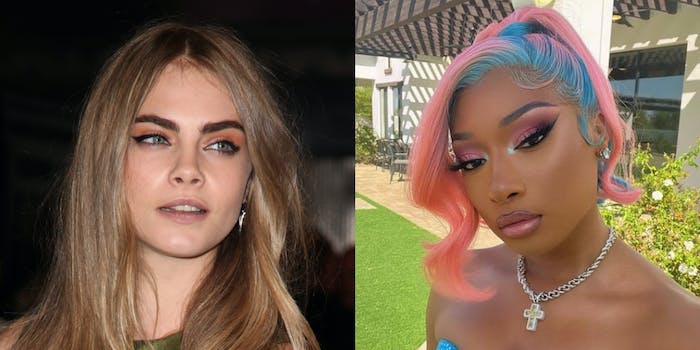 Megan Thee Stallion’s getting praised for how she handled it.

Days after the Met Gala, we’re still getting snippets from both the event itself and the many, many afterparties—including footage of Cara Delevingne and Megan Thee Stallion dancing at one such afterparty that sparked plenty of conversation.

In one of the brief clips circulating online, the two dance together at a Met Gala afterparty. At one point, Delevingne tries to say something over the music to Megan Thee Stallion.

But in the other, Delevingne leans forward as Megan Thee Stallion appears to steady her and set her back.

It’s the latter clip, which is only a few seconds long, that’s capturing people’s attention. When the video was shared on Deuxmoi’s Instagram Stories and subsequently reposted on the gossip account’s subreddit; the latter framed the interaction as an attempted kiss.

“She shut that down real quick,” one person said of the second interaction.

But some people also called out Delevingne for invading Megan Thee Stallion’s personal space and praised her for how she handled it.

Neither of them has touched on the videos circulating online after they went viral. Megan Thee Stallion is well in the midst of promoting her latest single “Plan B” while Delevingne’s most recent post features her main Met Gala event.