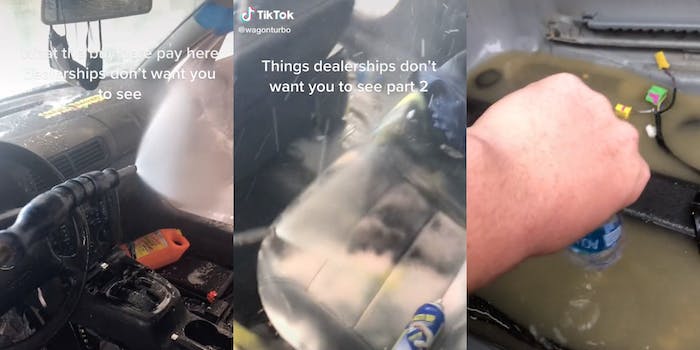 A viral TikTok series shows a controversial method that dealerships allegedly use to clean cars, leaving viewers divided on the issue.

TikTok user @wagonturbo, who goes by Austin on the platform, shared footage of a car’s interior getting power sprayed down with soap and water. That’s right, the interior.

Despite the video footage, viewers couldn’t believe that this is a real practice used by actual dealerships.

“How is that ever gonna dry? It will leak water 2 weeks later,” one viewer commented. “Even a month later water will leak from somewhere.”

Others chimed in, saying the car is likely ruined after a washing like that.

“Might as well say totaled on the paper lol,” one person said. Another wrote, “That’s not good for the electronics.”

Someone else commented, “[You] just destroyed all computer or electrical. I own a detail shop [and] I don’t even do that. There are a lot of ways to detail the car without destroying the car.”

Some viewers had jokes like “Put it in rice.”

Austin posted a follow-up TikTok, saying “Things dealerships don’t want you to see, part 2.” The footage showed him continuing to hose down the ceiling and seats inside the car.

In another TikTok, Austin wrote, “I will sink this car in a river before I let anyone on TikTok tell me the right way to clean it.”

Other videos show Austin revealing piles of mold under the seat and tediously draining the water with a water bottle. It’s unclear whether he had an extra car laying around to super-soak or if he thought it was all a worthwhile joke, and viewers are still confused judging by the comments on his most recent videos.

Austin did not respond to the Daily Dot’s request for comment.