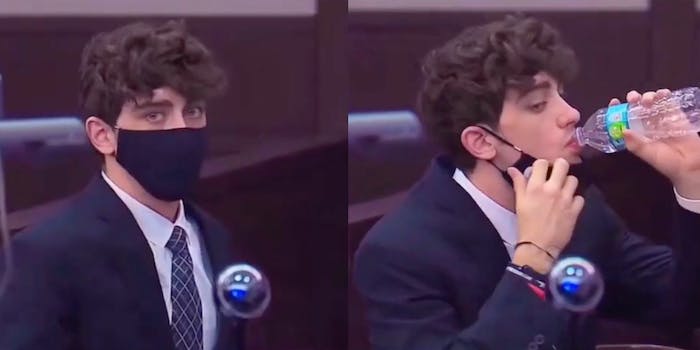 ‘Too cute’: TikTokers are simping over man sentenced to 24 years in prison for killing a mom and daughter in street race

'People on the internet and on TikTok specifically think that this punishment is too harsh and that he deserves a second chance.'

Some social media users are seeking “justice” for a 21-year-old popular TikToker who was sentenced to 24 years in prison for vehicular homicide.

In 2018, when Cameron Herrin was 18 years old, he hit 24-year-old Jessica Reisinger-Raubenolt and her 1-year-old daughter, Lillia, while participating in a street race, according to local news outlet FOX 13 Tampa Bay. Both the mother and daughter died.

Reisinger-Raubenolt was reportedly pushing Lillia in a stroller across the Florida street when they were struck. A report revealed that Herrin was driving up to “102 miles an hour before the driver began a hard braking, right before the crash.”

Herrin was reportedly sentenced in April 2021. The judge on the case, according to FOX 13, pointed to Herrin’s alleged history of excessive speeding as part of the reason he sentenced the 21-year-old to 24 years in prison.

Some of Herrin’s fans who claim his 24-year sentence is too harsh—and that he’s too attractive to be in prison—started an online campaign with the intent to get Herrin released early.

A TikToker, who is known for creating news-related content on the platform and has over 500,000 followers, recently made a video about Herrin to explain to users why they’re seeing his “face all over TikTok.”  Her video has been viewed over 2.2 million views since being posted on Aug. 4.

“People on the internet and on TikTok specifically think that this punishment is too harsh and that he deserves a second chance,” TikToker @hannahkosh says before reading some of the comments of support he is receiving. “Here are some of the comments: ‘Poor boy, I hope they will forgive him, he looks innocent. He didn’t do it on purpose,’ and ‘He doesn’t deserve that. You’re too cute.'”

@hannahkosh then points to the Change.org petition seeking “justice” for Herrin. The petition has garnered more than 28,000 signatures so far.

Many of the TikTok videos feature photos or clips of Herrin’s sentencing and time in court.

Some TikTokers are even comparing Herrin to other “criminals” dubbed attractive by people online, like Victoria Mendoza, who reportedly received a 16-to-life prison sentence after fatally stabbing her girlfriend, 21-year-old Tawnee Baird.

Charlie Puth responded to one such TikTok video in which his music was used, saying, “Don’t use my music for that shit.”

Herrin has over 2 million followers on his TikTok account, which was recently purged of all of its content, according to PopBuzz. It’s unclear if Herrin gained his massive following before or after the incident. Court documents, reviewed by local TV station WTSP, reveal that Herrin is appealing the sentence.