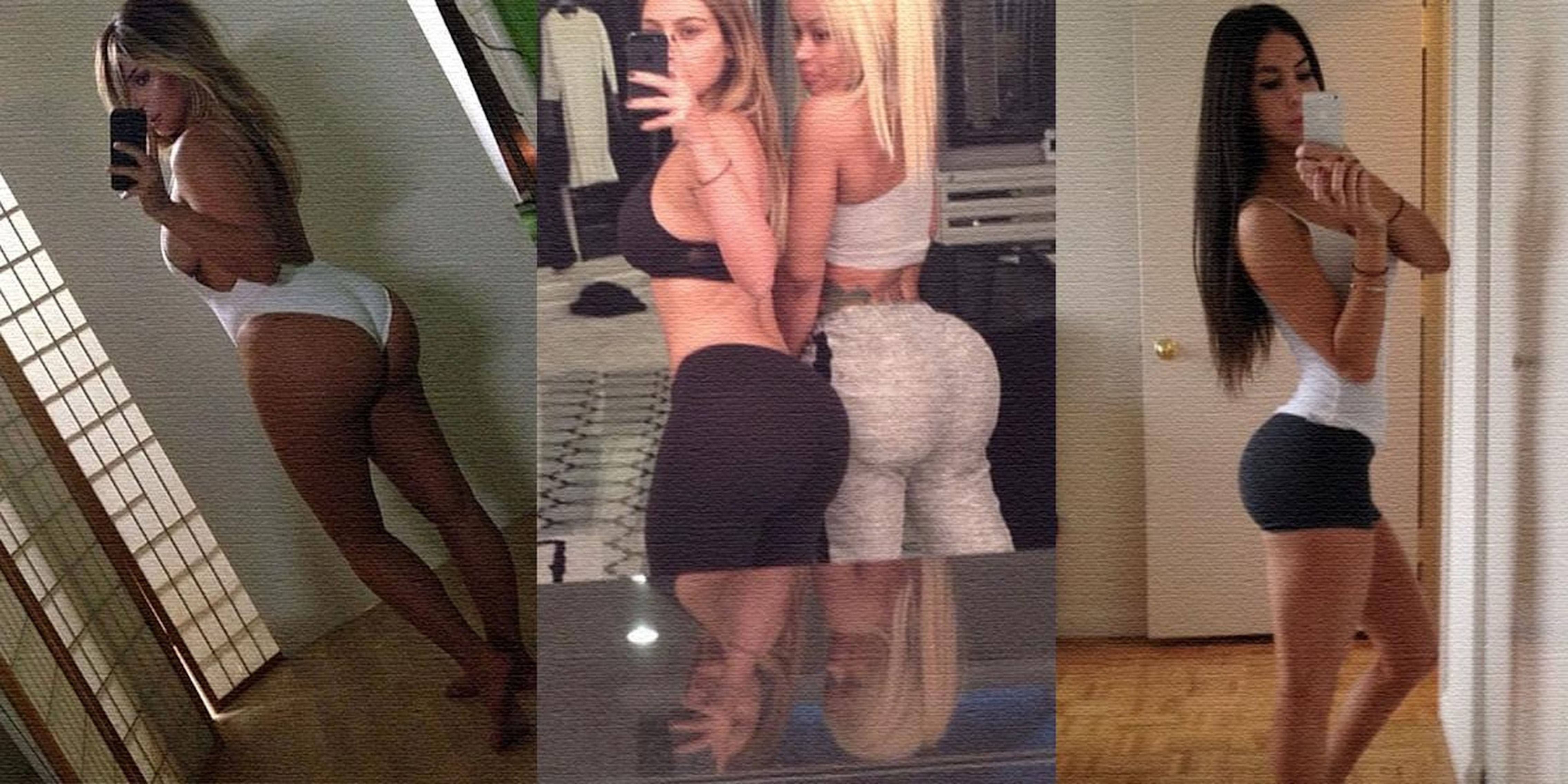 The complete Internet history of the butt selfie

How the world got (ahem) behind the latest social media trend.

It’s official: The butt selfie is the only selfie that matters anymore. (While “belfie” is now an accepted term, I rather enjoy the honesty of butt selfie.) An aggressive blitz of butt selfie narratives have captivated us here at the Daily Dot.

Butt selfie queen Jen Selter has shot to immediate and near-incomprehensible fame for her much-Instagrammed derrière, and a riveting debate over the possibly Photoshopped butt selfie(s) of Kim Kardashian and Blac Chyna has only fueled our appetite.

In fact, the infamous white swimsuit picture Kardashian Instagrammed back in October (which was followed by the Kanye TMI to end all Kanye TMIs) arguably blazed the trail for self-recognized butt selfies. But if you think the one-piece seen round the world opened the doors to our cheeky predilection, you’d be wrong, because the belfie’s beginnings can be traced all the way back to 2012.

Behold: the first butt selfie ever posted to Instagram. July 18, 2012—write it down, folks. The day a girl hashtagged #buttselfie (along with 18 other things).

It’s a relatively innocent butt selfie. Because Instagram doesn’t have its own search function, I turned to Statigram and Webstagram to troll for the origins. Both sites yielded 364 photos (as of this writing), and the above image is the first one in the swiftly growing collection. 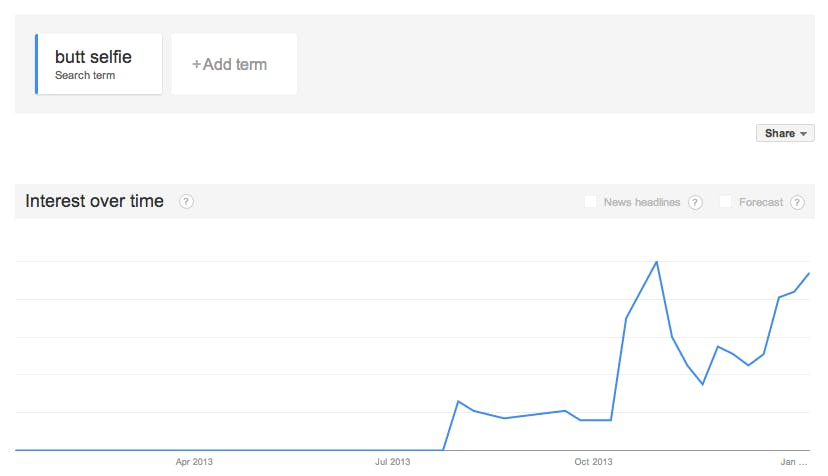 Google Trends tells a different story. According to the search giant’s Web tool, July 28, 2013 marks the first mention of the phrase “butt selfie.” Between that day and Aug. 3, it made 18 appearances. Though leading up to that, a handful of celebrities were responsible for building momentum: A headline here, on July 8, dropped Heidi Klum’s “bum selfie” (oooh, saaaahhhwing-and-a-miss!); Cosmo wrote an article on July 25 wondering whether Anthony Weiner sexting partner Sydney Leathers’s thong-framing photo was an indication that we’d fallen over backward (pun intended) for the rear.

A couple of (NSFW) tweets in the same time frame almost hashtagged #buttselfie, though the content lives up to the title.

By the end of July, the butt selfie had transitioned from novelty pose mostly appropriated by celebrities to the selfie of the people—albeit mostly women. Instagram-gallery sites that gather and request submissions from blessed ladies were creating odes to the butt selfie, even calling for more of them.

There’s a chicken-and-egg question to be asked in all of this: Did the butt selfie cause us to start celebrating the behind, or did celebrating the behind cause us to start taking butt selfies? It’s not like appreciation for nice ass is a new thing; “Baby Got Back” was a hit in 1992. Jennifer Lopez introduced the TRL generation to an ample backside back in the late ’90s (this image of Ben Affleck lovingly caressing her moneymaker was cemented in my young mind years ago).

And even Kim K. has been astounding the world with her bonkers waist-to-hip ratio and everything that lies in between since she weaseled her way into our consciousness sometime around 2003. Why, all of sudden, did the world determine that now was a good time to pay respect to the butt?

Plastic surgeon Dr. Shlomo Widder of Widder Plastic Surgery says that while he’s been doing butt implant surgery for a little more than a decade, it’s only in the past two years that he’s seen a considerable increase in demand for the procedure—a timeline that generally follows that of the butt selfie. “Most of my butt implant patients are Hispanics and African-Americans, so culture motivation is significant.”

“Celebrities [also] brought it to the front line and legitimized the butt-augmentation surgery,” he explains. “Names like Jennifer Lopez or Kim Kardashian are very often mentioned by my patients in the consultation.”

The answer isn’t all that interesting, really. The combination of interest in and appreciation for the ass, the digitization of our sexuality, and the viral uptick in image-sharing apps naturally would only result in one thing: butt selfies.

“I can’t recall any stories [about butt selfies] myself from any earlier than this summer,” an admin named Michael from Bootyselfie.com (a very NSFW site where women submit backside shots) tells me. “We started the blog about two months ago because of the selfie trend and wanted to rank in the search engines for it.”

He also mentions that celebrities posting these types of photos encourages their fans to do the same: Despite the huge difference in followers, we have the same tools as the butt-selfie-posting famous—the same social platforms, the same filters or editing apps, the same camera phones, and the same (at least, at its most basic) body part.

So, yes, it all comes back to celebrities. Despite all the history, the aforementioned Kardashian Instagram from this fall—Oct. 16, 2013, to be precise—is perhaps what brought the butt selfie to the mainstream:

What followed could only be described as hysteria: Was this new mom over-sexualizing herself, debasing herself? Perhaps she was proudly flaunting her post-baby body, giving into the pressures celebrity women commonly face after giving birth. Or maybe she was just taking a picture of her butt because lots of girls (and yes, boys too, though not nearly to the same degree) were taking pictures of their butts.

And then in November, this was added to Urban Dictionary:

The butt selfie has evolved, too. It’s not just an overtly sexual “look at me!” shot of the behind. Sometimes it’s a mean creepshot:

Selfie with a butt crack ;) pic.twitter.com/vwza3ziQYz

Or a sarcastic posterior shot posted in mocking of the whole thing:

And of course, there’s the mirror-behind-you butt selfie; quickly becoming a classic. The goal is to capture the butt and face in the reflection.

I won’t pretend to understand what this is.

Whatever it becomes, there’s no arguing the butt selfie has stolen the moment. Born of an ordinary Instagram user, adopted en masse by female celebrities, and given back to the people, the butt selfie has hit duckface status. We can only assume it’s on its way to becoming even more popular, climbing the hashtag ranks even higher.

But you know what they say about assuming.