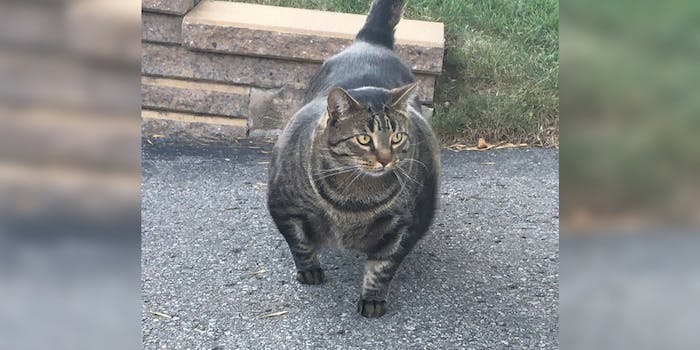 Buff Cat is here to PUMP MEOW UP!

Ladies and gentleman, meet the super muscular cat the internet can’t get enough of, known simply as Buff Cat.

everyday i think about this buff cat i encountered last year pic.twitter.com/BxIYvKz2id

The person running the @officialbuffcat Twitter account didn’t immediately respond to the Daily Dot’s request for comment but told BuzzFeed News that she spotted the cat in her neighborhood in Quebec.

The account was created in March and already has over 16,000 followers, but it appears the first post appeared just a few days ago, on May 28.

As you can see, Buff Cat is not just big, but incredibly muscular.

here's a video of the buff cat pic.twitter.com/xTVETgfBoQ

Even Dr. Dan Smith, a New York veterinarian, is impressed by Buff Cat. Smith told BuzzFeed News he wasn’t sure what caused the cat’s unique physique, but it might be similar to a genetic condition found in some cattle, and more rarely, in dogs.

“There is a genetic mutation that’s found mostly in some cow breeds that is called double-muscling (look up some pictures, they look fucking swole!)” he said, “and I’ve heard of rare cases of it in some dog breeds like Rottweilers and Greyhounds, but never in a cat. This might be the first.”

He also said “that boy is an absolute unit,” which is pretty undeniable.

And naturally, there are a bunch of memes.

Concept: @officialbuffcat is just an inflated cat balloon like in shrek pic.twitter.com/FwC3IhNc9h

The pinned tweet on the account says the pictures and video of Buff Cat are from last year, and it appear the pumped up feline has yet to be spotted again. According the corresponding Instagram account, we’ll get more of the Buff Cat if he makes another appearance.

But for all we know, he could be off saving the universe as we speak.