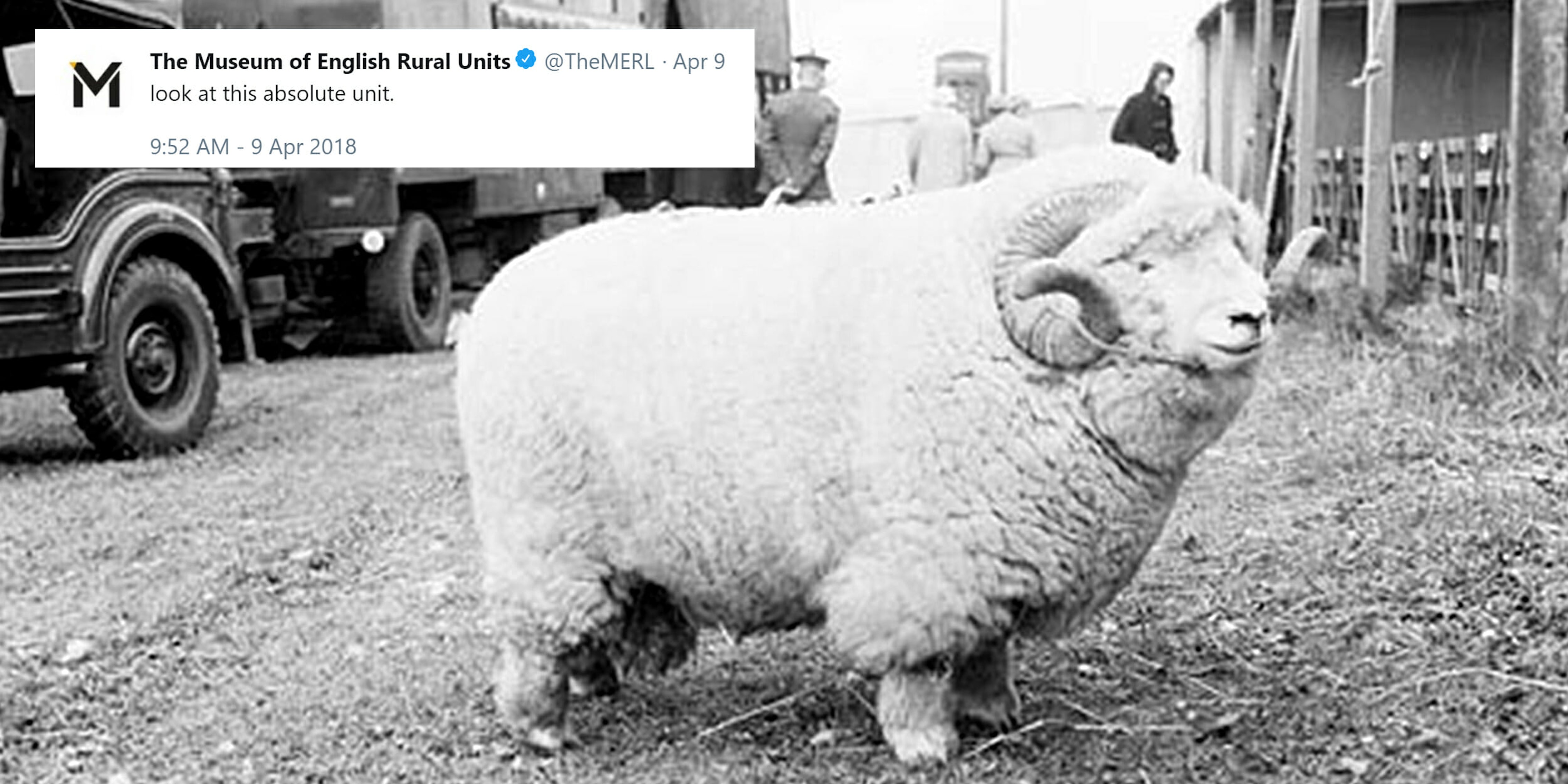 This sheep is undoubtedly an 'absolute unit.'

Turns out the Museum of English Rural Life is even more fun than it sounds. Someone over there decided to tweet out a picture of this rather impressive-looking sheep and label him an “absolute unit.”

The museum even changed its Twitter display name, no doubt temporarily, to the Museum of English Rural Units, showing total commitment to the joke.

If you happened to miss the “absolute unit” meme, it basically just means that something, or more often someone, is very large. It started out with this tweet about British hotelier David Morgan-Hewitt seen here with Queen Elizabeth.

In awe at the size of this lad, absolute unit pic.twitter.com/pZmiY73LXa

I am in awe at the size of this lad. Absolute unit pic.twitter.com/aPI35hADlr

The MERL didn’t stop at just sharing the picture and changing its Twitter display name; it went into the whole history of this particular unit.

We’ve been doing some archive detective work on our absolute unit.

First off, we have shelves of units. So many they need their own key, and there is one called ‘Black Welsh Mountain’.

Let that sink in.

(We found our boi on this tasteful salmon pink card) pic.twitter.com/DMj64LET9b

We also dug out the original print of the photograph, and the information on the back pointed us in the direction of 22 May 1962 in the Farmer and Stockbreeder journal.. pic.twitter.com/1s6xq55giI

It even created what will probably be this year’s biggest hashtag, at least literally speaking. Check out this absolute unit.

And here’s our absolute unit:

BURSTING AT THE SEAMS pic.twitter.com/qNZkIGdCmd

“Hasn’t got a fault”, said Mr W. Baker,
of the two-shear ram he gave the Exmoor
Horn championship to. This was one from Mr.
G. F. Thorne’s 400-ewe flock, not of his
own breeding but bought from a nephew at a
Society Show & Sale last year for some
90gs. pic.twitter.com/lU4JwyViFH

Turns out the English countryside is full of “absolute units,” and if you want to know why you can read this article the MERL put out in response to their viral tweet. There is also this short cartoon the museum shared about selective breeding.

The museum even has a guide to drawing your own units, if you are so inclined.

We made this handy guide to creating your own #AbsoluteUnit, we hope it is useful#givingback pic.twitter.com/e4QkWuQyTW

The original tweet now has almost 27,000 retweets and almost 100,000 likes. It seems like it might be single-handedly bringing back a meme that died off months ago. What an absolute unit.