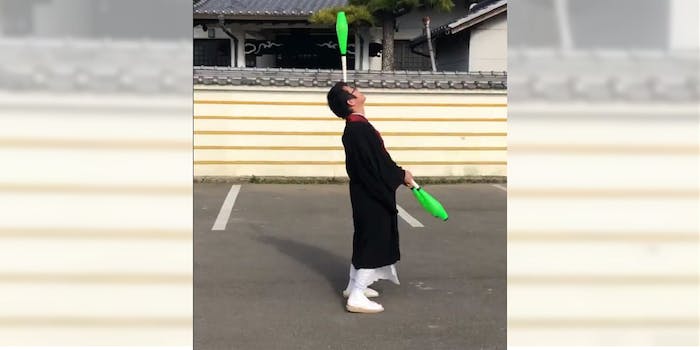 Robes can't stop them from getting physical.

Plenty of people have taken to Twitter to air their grief under a unifying hashtag, but who’d have thought it’d be the platform of choice for angry Japanese Buddhist monks?

Earlier this week, a Buddhist monk in Fukui, Japan, received a traffic ticket for driving in his monastic robe. Though he told the Yomiuri Shimbun he’d been driving that way for 20 years without incident, a police officer purportedly told him, “You can’t drive in that kimono” after pulling him over. Local law prohibits driving in clothes that may impinge safe driving.

The monk is refusing to pay the ¥6,000 fine (equal to about $55), and he and his local sect are adamant the regulation infringes on their daily activities. Other Japanese monks agree and are showing their support by flexing just how non-restricting their attire can be.

#Japanese monks are taking to Twitter to prove how agile & athletic they can be in their robes under the hilarious hashtag #僧衣でできるもん, after a recent incident where a Fukui monk was ticketed for driving in that outfit, which police insisted unsuitable for driving https://t.co/fZ7TO0eQCz

Using the hashtag #僧衣でできるもん, translated by several Twitter users as “I can do it in priest’s robes,” monks are sharing videos of themselves doing everything from juggling to playing the drums to whatever the heck this is to prove their religious duds don’t hold them back.

Stop whatever you are doing now and check out the hashtag #僧衣でできるもん . Japanese police officers ticketed a monk driving saying their robes "are too constrictive" (the hashtag is basically "I can do this in priest robes") and contains many gems of priest agility. https://t.co/GWmvBzOayT

While most of their tweets are in Japanese, Twitter users worldwide are supporting the surprising subsect of the Twitter community.

#僧衣でできるもん is what the kids refer to as "lit" https://t.co/2Q4myChrJc

Stop whatever you are doing now and check out the hashtag #僧衣でできるもん . After a move by police officers to block them from driving saying their robes are too constrictive, Japanese Buddhist monks are showing off their sweet moves in full garb as proof of their mobility. https://t.co/XW9rUTito6