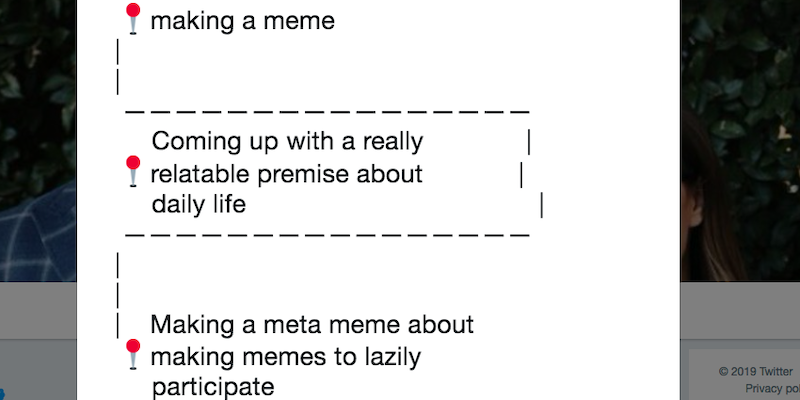 Bad habits die hard. The thing is, we tend to know exactly how to fix most of our problems. There’s usually a simple solution to our problems, yet most of us continue to do the same thing over and over again. The “pushpin emoji detour meme,” which evolved from the “distance meme” that gained popularity in October, is demonstrating just how often we avoid the simple solution to our habits. Rather than doing what we know we should, we instead take a detour to bad habits-ville.

The meme starts with a pushpin emoji and says “me,” showing where we start. It then trails down and around another pushpin emoji that says the sensible thing we should be doing right to the bottom where we arrive at the same old habit.

Some people are using it to display how they navigate their relationships.

Others have explained their self-care routine with the meme.

And many are using the meme to show how they wear the same things, watch the same shows and read the same books rather than ever trying anything new, despite likely constantly sayting they will.

Memes continue to hold up a mirror to reveal just how perdictable we all are. Here’s to many more in 2019.