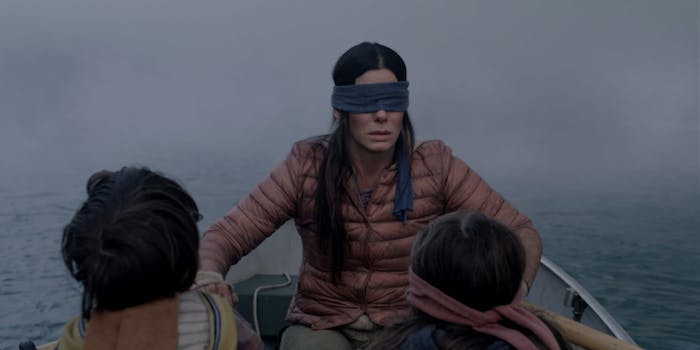 Netflix is a global corporation, but it also cares about you safely navigating viral challenges.

On Wednesday, the company issued a warning to people participating in the Bird Box challenge, a viral stunt that emerged from its original film Bird Box, in which Sandra Bullock navigates a mysterious plague with two children in tow, all while blindfolded. It’s already become a meme, but its real-life adaptation has Netflix PR urging people to “not end up in the hospital due to memes,” which should really go without saying in 2019 but here we are.

Can’t believe I have to say this, but: PLEASE DO NOT HURT YOURSELVES WITH THIS BIRD BOX CHALLENGE. We don’t know how this started, and we appreciate the love, but Boy and Girl have just one wish for 2019 and it is that you not end up in the hospital due to memes.

The challenge has manifested in a few different ways, ranging from parodies to potential child endangerment. But the common thread is that everyone is blindfolded.

This is it for the #birdbox challenge😂😂😂😂😂
How "Beyoncé" giggled sent me😂😂😂 pic.twitter.com/hmpWrHgUdy

Y’all gotta chill #BirdBoxChallenge 😂😂 why he do the baby like that pic.twitter.com/hspFdNHzTC

We know Spongebob would have kill the Birdbox Challenge. that’s the only way he know how to drive #BirdBoxChallenge pic.twitter.com/rFXSKIf4eZ

Of course, the warning caused those who didn’t previously know about the challenge to look it up, but that might also be in Netflix’s favor.

I- didn’t know this was a thing—- Im gonna go try it now! Thanks Netflix!! XD

Have we learned nothing from the Tide Pod challenge?