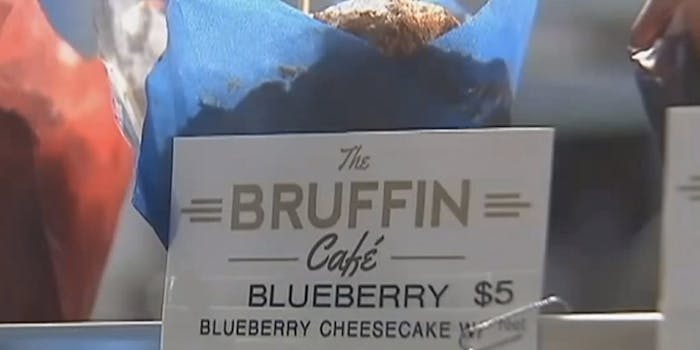 Meet the bruffin, the delectable food-spawn of a muffin and a brioche

The burffin hopes to become the next great food fad

We’re only a few weeks into the new year and already a new food Frankenstein is upon us.

The bruffin—part muffin, part brioche—has arrived on the streets of New York City, and if its creators have their way, it will soon be on every kitchen table and in every lunchpail from sea to shining sea.

Is this odd food hybrid another cronut, or is it another quiche? This interview with bruffin creators Michael Bagley and Medy Youcef tells you—a member of the nationwide jury that votes with its forks—everything you need to know.

While social media is not exactly blowing up over the bruffin, the seeds of virality may have been planted: the new delicacy has been featured on Good Morning America and The Wendy Williams Show.

Another path to stardom is to have your product spoofed by some clever YouTubers. The bruffin achieved this feat as well when the webseries Let’s Get Greedy paid musical tribute to the new creation. If each of the channel’s 238 subscribers bought one bruffin, Bagley and Youcef would be able to pay about one-third of the rent at their Manhattan Meatpacking District headquarters.

The bruffin’s 11 varieties will soon be available to order online, although one has to wonder how long this sweet or savory delight can remain fresh as it’s shipped across the country. Indeed, web ordering from one production facility won’t be enough. If the bruffin is to become the next Cinnabon or Auntie Anne’s pretzel, it will require a boatload of capital to spread the word and open bakeries around the country.

It’s easy to imagine the bruffin guys on a future episode of Shark Tank, where host Mark Cuban would brush off its creators while brushing crumbs away from his mouth and Mr. Wonderful would suggest they take the bruffin out back and shoot it.

Potential ridicule aside, with enough vision, guts, luck, and blind faith, Bagley and Youcef could stick it out with their brioche-muffin creation and make it to the big-time. If the two men can catch a few breaks along the way and convince the public (and investors) that the bruffin is a genius food trend, we may see Rachel Ray replicating it on some Food Network program before the year is over.

Worst-case scenario: check the day-old rack at the local supermarket.