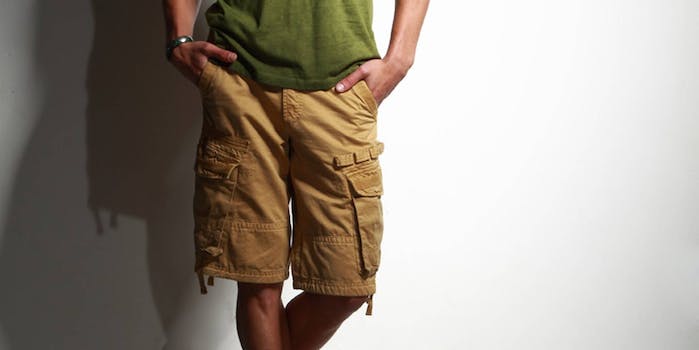 They're not giving up their cargos without a fight.

A Wall Street Journal article about a marriage torn apart at the seams by a man’s love for cargo shorts took the internet by storm on Monday. The story, which details how a Utah man’s wife covertly discarded 15 pairs of his beloved cargo shorts over the course of their 11-year marriage, riled the cargo community at large.

The piece also addresses the generational factors of cargo short syndrome, with maybe the best expert citation ever:

“Those [’90s] teenagers are now married, and they don’t get rid of their clothes. They don’t evolve,” said Joseph Hancock, a design and merchandising professor at Drexel University, who wrote his Ph.D. thesis about cargo pants.

Though the article is written in an objective reporting style and contains nary a directive, comments on the article and on the Wall Street Journal’s Facebook page are full of rebuttals and aggressive rhetoric in favor of cargo shorts. These bros are downright militant.

Some are posting more elegant, but equally impassioned, arguments.

Others claim the article has inspired them to don cargo shorts daily.

And still others insist that the article’s author, Nicole Hong—who happens to be, ahem, a woman—has no idea what she’s talking about.

Hong shared another outraged reader’s response to the article on Twitter.

Hong is by no means the first to shed light on public distaste for a pocketed pant. About a year ago BuzzFeed published an open letter to men everywhere that implored them to abandon their frumpy cargo shorts once and for all, in favor of a sleeker fit.

And, let’s not forget, the decline of Aéropostale precedes Hong’s “exposé.” The cargo short retail giant filed for bankruptcy in May following several quarters of declining sales. RIP.

On Twitter, several brave men have taken a stand against the issue of “cargo short shaming”.

Enough with the cargo shorts shaming

Others have pointed out that celebrity allies like Leonardo DiCaprio wear the oft-attacked garment.

And others have asked, quite logically, what exactly men are meant to wear in place of cargo shorts?

Okay, perhaps cargos do have their place.

Like when you hit the town with the squad.

Or in a Jill Stein joke.

Jill Stein is in the pocket of Big Cargo Pants

Or in an #AllLivesMatter joke.

Cargo shorts "were a big trend in the '90s, which is not in this century, by the way." —@NPRinskeep

Just heard a news report that for the first time in a decade the sale of cargo shorts is down. We did it! Never give up on your dreams!

Even chief-douche-in-charge, lord of the douches, overseer of all that is douchely, Spencer Pratt, denounces cargo shorts.

Yeesh. When Pratt’s not on your team, it might be time to admit defeat and hang the cargos out to dry.