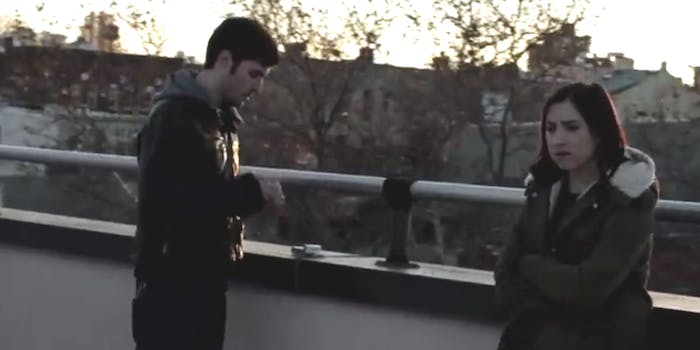 And it has a hashtag in the title. Of course.

Two weeks ago, a Brooklyn rooftop breakup went viral when an onlooker livetweeted the couple’s painfully on-the-nose conversation. Now, the incident has (finally?) been made into a short film.

Comedian Kyle Ayers was sitting on his roof when a couple stormed onto it and started fighting. Ayers posted choice, ridiculous quotes from the fight on his Twitter, and the Internet became fascinated by this terrible couple.

Kevin Losani stars as the noncommittal boyfriend, who says charming things like, ““I’m not talking about love on a roof in Brooklyn” and “Are we getting pizza or what? I don’t mean to change the subject, but are we?” Jessie Ruane plays Rachel, the girl who finally ends it.

Not that I wasn’t already, but hearing the lines spoken by actors only reinforces my stance as firmly #TeamRachel.