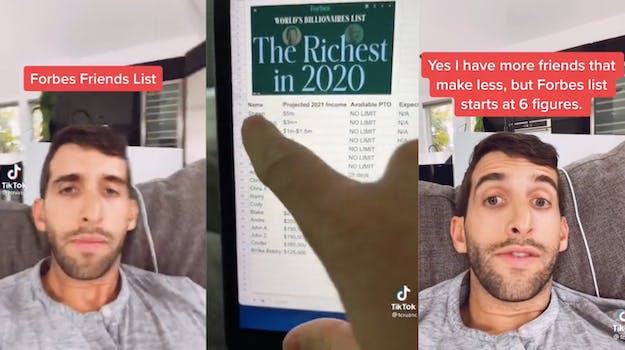 ‘Broke Bobby still making 5x what the average American does’: Spreadsheet ranking friends by how much they earn sparks ire

‘Rich people are so out of touch.'

A TikToker posted a video showcasing a spreadsheet that he and his friends use to plan trips, which includes their incomes and names. The spreadsheet is what he calls Forbes Friends List and contains the 10 top-earning friends in their group, with Shawn in the number one spot earning $5 million and a person dubbed “Broke Bobby” in last place, earning $125,000.

The video starts off with Tom Cruz, the TikToker, explaining that he and his friends made a spreadsheet to use when planning trips to see who should be invited based on how much they can spend per trip.

Along with their incomes, the spreadsheet also takes into account how many paid time off days they have or have left, if they have significant others, whether or not they’re gamblers, any bonuses they might earn, whether or not they’d be willing to split a private flight, and if they’d travel to a third world country.

Cruz (@tcruznc), an investor with over 819,000 followers on TikTok, posted the original video to TikTok, but it has since been seemingly taken down. It was later reposted to Twitter by Karim Alammuri and garnered over 2.2 million views, over 15,000 retweets, and over 46,000 likes.

Social media users were shocked by Cruz’s content, especially calling one of his friends “Broke Bobby,” leading the nickname to trend on Twitter on Thursday afternoon.

“‘Broke Bobby’ still making 5x what the average American does,” one wrote in a quote tweet. “Rich people are so out of touch.”

Another person wrote, “I hope Broke Bobby never talks to y’all again after this.”

Cruz also posted another video early on Thursday morning after the video began to go viral. In it, he answers some of the most common questions he was getting as the discourse raged online, like what each person does for a living. He says Broke Bobby is an accountant.

The Daily Dot has reached out to Cruz for comment.