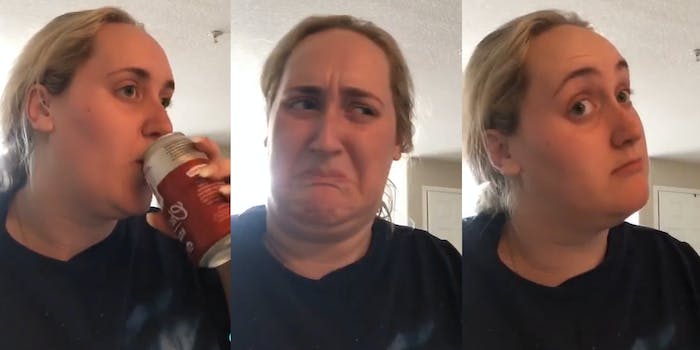 You know what? She's still not sure about kombucha.

You always remember your first time, especially if it’s captured on TikTok.

Perhaps user @brittanyt445 didn’t intend on making an entirely relatable meme out of trying kombucha for the first time, but her reactions translate universally. In the viral clip, she sniffs the can first, remarking that it “really smells like a public restroom.” Then she takes a sip, and the journey begins.

From there, she became the face of uncertainty and indecision.

Looking at myself naked in the mirror pic.twitter.com/qtAJympbBi

Me trying not to text him

“Let’s go out tonight”
Me: pic.twitter.com/bxnXz30LuN

Hanging out with a Capricorn the first 3 times & then the 4th pic.twitter.com/dp1SeoL5fx

The woman, Dallas-based Brittany Tomlinson, tells the Daily Dot that it’s been quite the trip: “Being viral is crazy, dude. You know how there’s like ‘April 2019, May 2019’ memes of the month? I’m deadass August 2019 and it’s blowing my mind.”

Still, she says the reactions and comments have been positive, and that “making people laugh has always been a joy of mine and now I’m literally making the whole world laugh and my heart is FULL.” And yes, she still thinks kombucha is “kinda nasty,” but “in a good way.”

While the kombucha clip went viral, Tomlinson has other relatable TikToks.