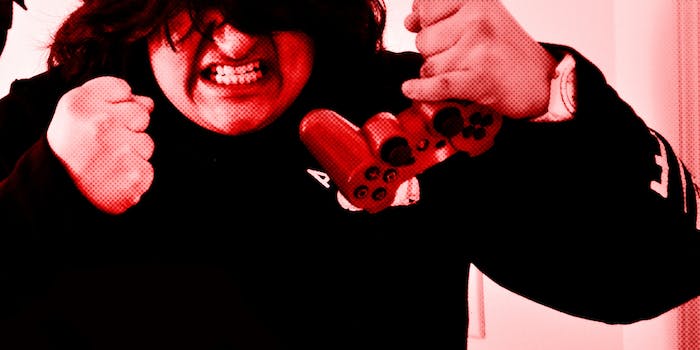 This time, they messed with the wrong girl.

They threatened the wrong woman this time. I am the Godzilla of bitches. I have a backbone of pure adamantium, and I’m sick of seeing them abuse my friends.

The BBC called me “defiant” in a caption. I plan to frame and put it on my wall.

My name is Brianna Wu. Ordinarily, I develop videogames with female characters that aren’t girlfriends, bimbos and sidekicks. I am a software engineer, a popular public speaker, and an expert in the Unreal engine.

Today, I’m being targeted by a delusional mob called “Gamergate.”

If you don’t know what Gamergate is, my God, do I envy you. Gamergate is basically a group of boys that don’t want girls in their videogame clubhouse. Only, instead of throwing rocks, they threaten to rape you. And, if that doesn’t work, they’ll secretly record your conversations and release the lurid details of your sex life in a public circus. From seeing the #gamergate mobs plan this on 8chan, it seems like they’re having a lot of fun.

It started two months ago, when my friend Zoe Quinn dated Eron Gjoni. Their relationship ended, as relationships sometimes do. Only, rather than get drunk and play Madden, Eron decided to secretly record everything Zoe said, and released it on a blog he titled “The Zoe Report” in an attempt to destroy her.

If Zoe had been a man, the blog would have been laughed off as the work of a jilted lover. But instead, a mob formed to destroy her. Ostensibly concerned about ethics, Gamergate was very worried about Gjoni’s accusations that Zoe might have had a relationship with a journalist to get favorable reviews of her universally celebrated title, Depression Quest, which has been downloaded more than a million times and has helped countless people better understand their depression.

It tells you everything you need to know about Gamergate that this mob went after Zoe and not the journalist.

The Gamergate mob isn’t a new thing, though it’s only recently been named. They targeted my friend, Samantha Allen, back in July, when she dared criticize Giant Bomb’s decision to remain the only major site in videogames with a 100 percent white, straight and male employee pool.

They ran through their playbook. They targeted her on Twitter, they harassed her. They researched her past. They questioned her personal relationships. They threatened her. And they have done everything possible to try to quash one of the videogame industry’s most insightful and powerful voices.

What was my crime?

A fan of my show on 5by5, Isometric, made a meme of some of my Tweets about Gamergaters.

I LOLed. I tweeted. And, by Friday I was receiving death threats.

I have to be honest. A mob telling you they will castrate your husband, make you choke to death on the parts, murder any children you might have and then rape your ass until it bleeds has a way of scaring the hell out of you.

But, you know, because I am the Godzilla of bitches, by Saturday morning I was pissed off. I’m talking Jack Bauer pissed off. So, I decided I was going to do everything in my power to stop these fuckers.

Thanks in part to Wil Wheaton, one of my tweets about the death threats went mega viral. The press started calling. I wanted to crawl into a hole, but I pushed through and talked to them. Kotaku ran a story. Re/code ran a story. Polygon ran a story. I was barely sleeping or eating, but I pulled myself together for MSNBC and CNN. The anti-Gamergate movement started to catch fire. Over 100 stories have been written all over the world because I’m sick of these asshats taking out my friends and I’m calling them on their shit.

There’s no easy way to say this. I am a massive target for Gamergate and 8chan right now, and it is having horrible consequences for my life. They tried to hack my company financially on Saturday, taking out our company’s assets. They’ve tried to impersonate me on Twitter in an effort to discredit me. They are making burner accounts to send lies about my private life to prominent journalists. They’ve devastated the Metacritic users’ score of my game, Revolution 60, lowering it to 0.3 out of 100.

With all of this, my only hope is that my colleagues in the industry will stand by me—and recognize the massive target I made myself standing up to these lunatics.

I woke up twice last night to noises in the room, gasping with fear that someone was there to murder me. I can barely function without fear or jumpiness or hesitation. I’ve been driven from my home. My husband says he feels like he’s been shot.

But I have to be honest: I don’t give a fuck.

I am mad as hell at these people, and I’m not going to let them keep destroying the women I love and respect.

In part, because of the press campaign I’ve done in the last five days against Gamergate, the jig is up. The Entertainment Software Association, the largest trade group in our industry, denounced the movement. Vox ran an editorial about the pattern established with the threats against me: “Angry misogyny is now the primary face of #GamerGate.” And journalistic enterprises like Giant Bomb, which had sat on the sidelines, are finally discussing the issue.

Gamergate, I have one message for you so listen up.

When you take your last dying breath, I want you to know this. It was an absolute pleasure knocking you on your ass for the fine women in this field.

Photo via Maryam Abdulghaffar/Flickr (CC BY 2.0)