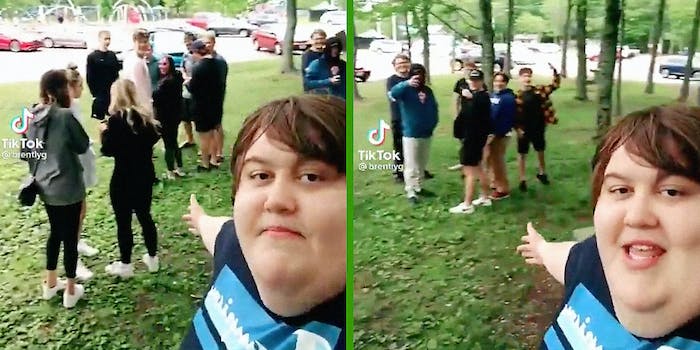 Brently, the TikToker who made an earnest plea for more friends, now has a whole crew

Brently made a call for friends. The internet delivered.

“If you build it, they will come,” the famous quote from A Field of Dreams goes, an ideology that works both for baseball fields and, in the case of a TikToker named Brently, getting a group of new friends to congregate at a park.

A few weeks ago, Brently posted a TikTok video to his account where he had a request: If you lived in the near vicinity of Moncton, located in the Canadian province of New Brunswick, and wanted more friends in your life, you should hang out with him and his friend Jeffrey, who stood behind Brently. Brently detailed some of their interests—they’re both into movies, Jeffrey’s into video games and comic book movies, and Brently likes books and comics—and asked people interested to message them.

Brently also shared clips of him and Jeffrey getting slushies and hanging out at home to give people a better idea of their dynamic; Brently is the more talkative person while Jeffrey is quieter on camera.

“If you live in the Moncton, New Brunswick area or are just generally in New Brunswick, we’d really like to be your friend ‘cause it’s just the two of us right now, you know?” Brently said. “We used to have a bigger group, but we’re looking to expand now because it’s just the two of us. So it’d be awesome to get a third person, or a fourth or a fifth, you know? We’re looking to expand and be cool together.”

Brently’s video is an earnest plea, one that also highlights our collective desire to connect with others, especially after over a year of lockdown. But the TikTok video went viral in part because of a tweet calling Brently’s video “the most depressing shit I’ve ever seen,” which led to the internet largely rallying behind Brently’s call to make more friends.

With thousands of new followers tuning into his videos, Brently organized a meetup at Centennial Park in Moncton. He had no idea who would show up beside him and Jeffrey but noted that they could order pizzas and bring soda for the people who did show.

Fortunately, this story has a happy ending. In a TikTok video posted over the weekend, Brently, filming in Centennial Park, showed us the results of his call to hang out in the park. And when more people arrived mid-video, he became even more excited.

A day later, Brently was still in awe over everyone who came to hang out with him and Jeffrey, calling it “the greatest day of my life.” Brently said there were around 30 people who showed up in total, but after some of them left, he got to connect with a smaller group, some of whom have already invited Brently to hang out again.

“I went and sat at this bench with Jeffrey and we brought the cooler over, and one by one, all these people started showing up,” Brently said. “Some people on bikes, some people just walking up, some people getting out of their cars, and I was so amazed. So surprised that all of these people were coming there to hang out with me and Jeffrey. It was a super big surprise after what happened at Gibson Falls, but I can’t say how good that made me feel. It was this rush of dopamine that I’d never had before. All these people there to be my friend.”