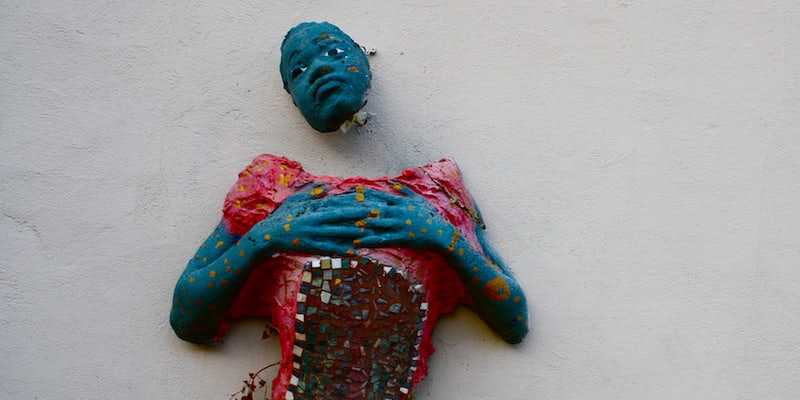 Social media: Where breaking up seems virtually impossible, because your exes are shoved in your face every 37 seconds.

“Other people you might know,” Facebook helpfully informs me, “include your abusive ex-boyfriend!” Meanwhile, Twitter suggests that I follow an ex with whom I parted on pretty good terms—but not good enough for me to want to follow her on social media. If I hop over to Instagram, a friend has just posted a picture of her going out to dinner with a group of people, including another ex-turned-friend I don’t talk to anymore.

Three pictures down, that one ex I just can’t seem to quit just posted a disgustingly cute picture with her new girlfriend. “Why am I still following her?” I ask myself, but when I navigate over to her profile I can’t seem to click the “unfollow” button.

Social media: Where breaking up seems virtually impossible, because your exes are shoved in your face every 37 seconds.

Apparently, we have a lot of anxiety about breaking up on social media, because guides to handling the delicate art of dealing with your ex on the Internet abound—both tongue in cheek and otherwise. This is serious business, after all. Do you unfollow your exes? How long do you wait to update your relationship status? Do you block/hide them so you can’t see their updates? What do you do about the friends who might be caught in the middle?

It used to be that a breakup could be accomplished quickly, quietly, and discreetly—with some awkwardness among your groups of mutual friends. Someone moved out, old pictures got ceremonially burned or hidden in the attic (maybe someday you’ll be able to bear to look at them again), and you settled down on the couch with some Oreos and old episodes of The West Wing to work your way through the pain. With time, your phone number would change thanks to a move, making it virtually impossible for old exes to just casually pop back into your life.

Now, you have an entire digital record of your relationship, and it’s not just the one you curated. Sure, there’s the metric ton of texts back and forth and sweet voicemails on your phone. There are the photos everywhere—on Flickr, Instagram, and Twitter. Then there’s the Vines, the tweets, the subtweets, the Facebook updates. You shared every aspect of your relationship with the world, and now you’re stuck with it being out there.

Worse yet, it’s spread beyond your control. There are all the pictures your friends have up with the two of you in them, tagged with your names. Google’s clever image algorithm kindly brings up pictures of you and your ex, and people associated with you—like your ex—when people search for you. Suddenly there’s this huge sprawling social media network that you can’t escape that seems to be making a concerted effort to remind you of what you had at every turn.

Thanks to the culture of sharing, that group of mutual friends caught in the middle is in an especially awkward position. Do they post photos of events they went to with one of you, risking the ire of the other? Do they mention one ex or the other at random in an attempt to avoid an appearance of bias? It’s no longer as easy as politely dodging the topic in social settings when the Internet is the social setting and everything is on the table.

It’s the pictures of the new life your ex is forging without you, and the constant anxious comparison of your own progress. Are you stuck in the same rut you were in before while your ex is off living the dream and finding a new, improved, better model of you to date? It’s easy to forget, then, that all of us are presenting an image on social media and that bragging about our lives is a great way to hide the things that aren’t going so well.

While a breakup is a breakup, social media is changing the nature of what breakups look like and how we approach them. This is a world where your ex is never truly gone, impossible to excise from your life. If your ex is a decent person and you were on good terms, maybe this is a good thing, even though the pangs of nostalgia can be hard to endure. It’s a reminder that your ex is a human being, and you dated once for a reason.

But when your ex is abusive and using social media to stalk you, suddenly it becomes much more scary. The protection and insulation of the offline world is difficult to access when your ex still has your phone number, can track you down through email and social media, can continually reinsert himself into your life. In this sense, social media has become a boon to abusive personalities—like exes who try to separate people from their friends and support networks, and those who want to continue intimidating and threatening the people who thought they were finally free of them.

The burden of keeping a safe, respectful distance from your exes usually falls upon one person, and that’s not the way it should be. While social media firms can’t stop people from sending out lugubrious subtweets in the wee hours of the morning or unwisely opening the profiles of the people they paradoxically insist on carrying torches for, they could enact tougher anti-harassment policies with more effective reporting, blocking, and hiding functions.

Because breaking up shouldn’t mean that people should be forced to retreat from social media and the people who make up an important part of their lives, all to avoid the lingering influence of a bad relationship.