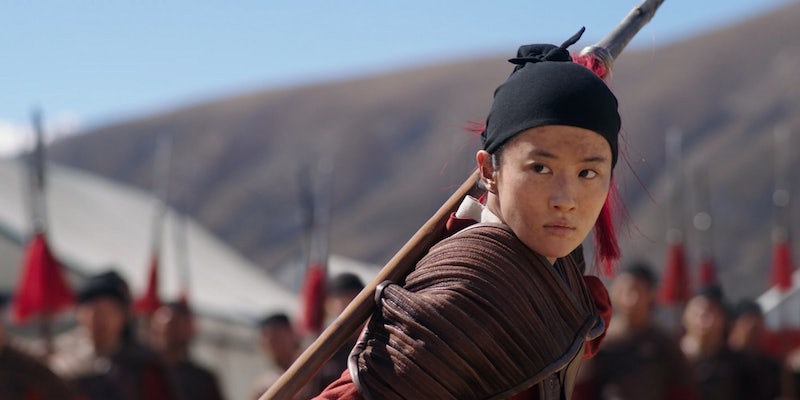 The #BoycottMulan hashtag has returned for the film’s release on Disney+, more than a year after it first appeared on social media.

The boycott campaign began in response to some comments made by lead actress Liu Yifei last year, voicing her support for Hong Kong police. Posting on Weibo, she shared a graphic that read, “I support the Hong Kong police, you can beat me.” This was obviously a very controversial statement, given the widespread police brutality recorded at the 2019 Hong Kong protests. The protesters had already inspired a great deal of international support, and it didn’t take long for Liu’s comments to inspire serious backlash.

As a result, Liu did not attend the Disney promotional event D23 last year, implying that the studio was concerned about bad press around Mulan. The film was already in a complicated position due to clashing concerns about cultural appropriation (given the film’s all-white creative team) and Disney’s desire to make a successful film for both Chinese and American audiences.

There’s been a lot of back-and-forth over this controversy. Some people argue that it’s unfair to punish everyone involved in a movie based on the actions of one individual—even if that individual is the face of the film. Others have suggested that as a public figure in China, Liu may have been pressured to voice support for the authorities. It’s certainly the case that Mulan became a political talking point in China. There was official government support for the rival hashtag #SupportMulan, which was linked to the deletion of 200,000 Twitter accounts that were “deliberately and specifically attempting to sow political discord in Hong Kong.”

So while Liu hasn’t made any further political statements, the #BoycottMulan campaign is still getting a lot of traction. And it may attract more support this year in the U.S., after months of America experiencing its own wide-reaching protests against police brutality.