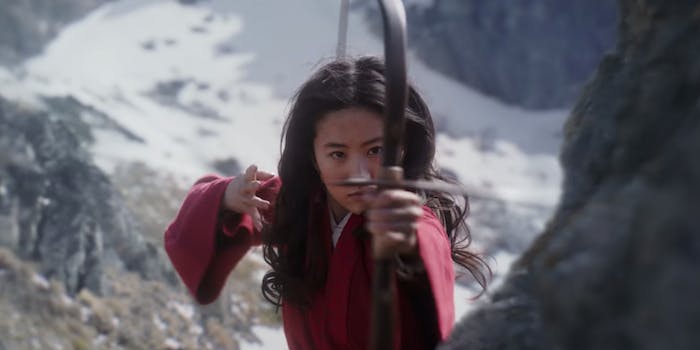 Police in Hong Kong have been accused of using excessive force on protesters.

The movement to #BoycottMulan has exploded on Twitter after the star of Disney’s live-action Mulan remake posted a statement voicing her support for Hong Kong police on the Chinese microblogging service Weibo.

Mulan lead actress, Chinese-American Crystal Liu Yifei, on Wednesday shared a graphic from China’s state-run newspaper The People’s Daily. “I support the Hong Kong police, you can beat me,” a translation of the graphic said, according to NBC News.

“I also support the Hong Kong Police,” Liu commented on the reblog of the graphic to her 65 million followers.

Liu is a naturalized American citizen. it must be nice. meanwhile she pisses on people fighting for democracy.

basically the actress of mulan support this. if this isn’t police brutality then what is #BoycottMulan pic.twitter.com/kJoEg5ykW6

Some saw Liu’s words as willfully negligent of the oppression that Hong Kong protesters are facing at the hands of the police force, with some asserting that Liu’s American citizenship has led her to be unsympathetic. Liu was born in China and moved to the U.S. when was 10. After living there for approximately five years, she became a U.S. citizen but eventually returned to China to further build her career.

Liu’s statement comes amidst protests that have been the site of rampant police brutality as Hong Kong citizens continue to demonstrate for their desire for democracy and the full withdrawal of an extradition bill.  The bill would have allowed criminals to be transferred between Hong Kong, Taiwan, and China. In the eyes of Hong Kong citizens, the bill was seen as an attempt by the Chinese mainland to overstep the bounds of autonomy that Hong Kong enjoys under the “one country, two systems” policy.

China is a huge market for any Western released blockbuster. The Chinese box office accounted for over $600 million of the approximately $2.8 billion made by Avengers: Endgame. However, with the Mulan remake not scheduled to open until March 27, 2020, it remains uncertain whether Liu’s pro-police sentiments will affect the film’s public reception and box office results in China.

Mulan isn’t the first live-action Disney remake to face controversy. The Little Mermaid’s casting of Halle Bailey incited a racist uproar among people who didn’t like that Ariel would be played by a Black woman.