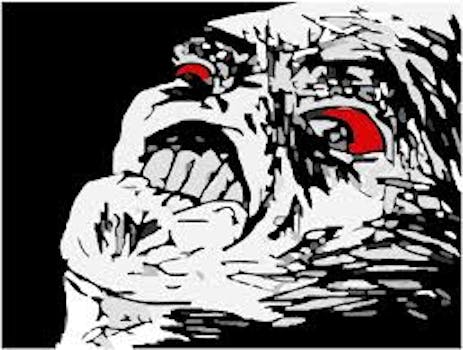 Pray for China: Rage toons are coming to Sina Weibo

Just when it seemed the Internet was ready to purge rage comics from its system, the cartoons have gone and jumped to a new host.

Just when it seemed the Internet was ready to purge rage comics from its system, the toons have gone and jumped to a new host. China’s largest social network has just introduced new animated emoticons based on the popular Web cartoons. Pray for the souls of Sina Weibo users.

If you’re like most people on the Internet, you may have briefly found rage comics entertaining. They’re a set of cartoon faces that people toss together into stories about how angry they are at some mundane event in their lives. They’re the rough equivalent of some kid slapping together a comic with stick figures and paste to complain about how the holes on class handouts never line up right with his Trapper Keeper.

Rage comics started on image board 4chan around 2007, before spreading to other sites–most notably, Reddit. There, users created a forum devoted to surfacing new user created comics every second of the day.

Soon,what was once an occasionally funny cultural outlier became ubiquitous on one of the most influential sites on the Internet. Hundreds of thousands of people became seduced by the notion that attaching silly images to their boring stories made them a kind of Internet working class folk artist.

But there was good news last month. Data released by a Reddit moderator showed traffic to rage comics’s home on Reddit was dropping precipitously: Even redditors were growing sick of the phenomenon.

Now rage comics are on the brink of another invasion. Here’s the full set on Sina Weibo, courtesy of the Blocked on Weibo Tumblr blog.